ISC Class 12th Physics Syllabus 2023: Physics is an elective subject in ISC Class 12 and forms a core part of the science course. It is a challenging subject with a vast syllabus. However, for engineering aspirants, Physics is a must-study subject. Even students in the medical field have to study physics because it’s part of most higher education entrance tests like NEET and AIIMS. Physics requires a deep understanding of concepts and critical thinking to solve questions. However, knowing the correct syllabus for the ISC class 12 physics board exam is also important so you don't under- or over-prepare. The ISC Class 12 Physics (Code: 861) consists of two papers: theory and practical. We have covered the ISC Class 12 Physics syllabus along with unit-wise weightage and details of the practical work. Read and download the latest and revised ISC Board Class 12 Physics syllabus 2023 pdf here.

The ISC class 12 Physics subject is divided into two papers: theory and practical. The Paper 1: Theory carries 70 marks and the duration will be 3 hours. The Practical will carry 30 marks (15 for practical work, 10 for project work and 5 for practical file). Check here the ISC Board Class 12 Physics Syllabus along with unit-wise weightage.

Note: (i) Unless otherwise specified, only S. I. Units are to be used while teaching and learning, as well as for answering questions.

(ii) All physical quantities to be defined as and when they are introduced along with their units and dimensions.

(iii) Numerical problems are included from all topics except where they are specifically excluded or where only qualitative treatment is required.

(i) Electric Charges and Fields

(c) Electric lines of force: A convenient way to visualize the electric field; properties of lines of force; examples of the lines of force due to (i) an isolated point charge (+ve and - ve); (ii) dipole, (iii) two similar charges at a small distance;(iv) uniform field between two oppositely charged parallel plates.

(d) Electric dipole and dipole moment; derivation of the  at a point, (1) on the axis (end on position) (2) on the perpendicular bisector (equatorial i.e. broad side on position) of a dipole, also for r>> 2l (short dipole); dipole in a uniform electric field; net force zero, torque on an electric dipole:  = x  and its derivation. 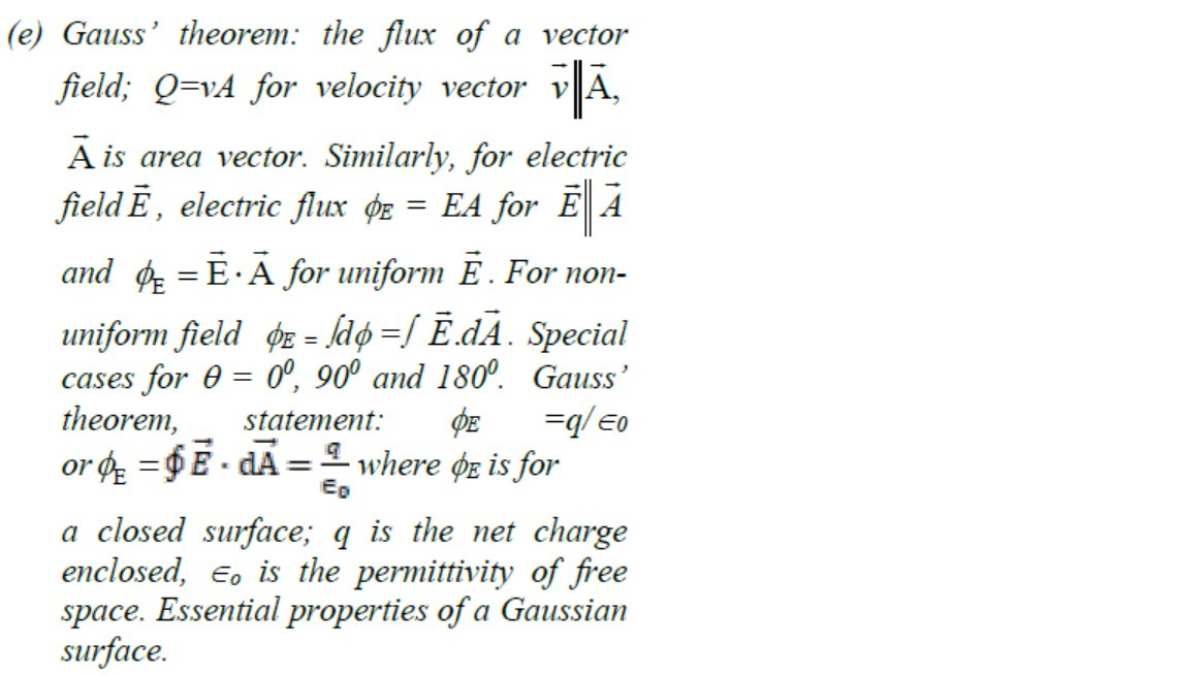 Applications: Obtain expression for due to 1. an infinite line of charge, 2. a uniformly charged infinite plane thin sheet, 3. a thin hollow spherical shell (inside, on the surface and outside). Graphical variation of E vs r for a thin spherical shell. E

Conductors and insulators, free charges and bound charges inside a conductor. Dielectrics and electric polarisation, capacitors and capacitance, combination of capacitors in series and in parallel. Capacitance of a parallel plate capacitor, energy stored in a capacitor. 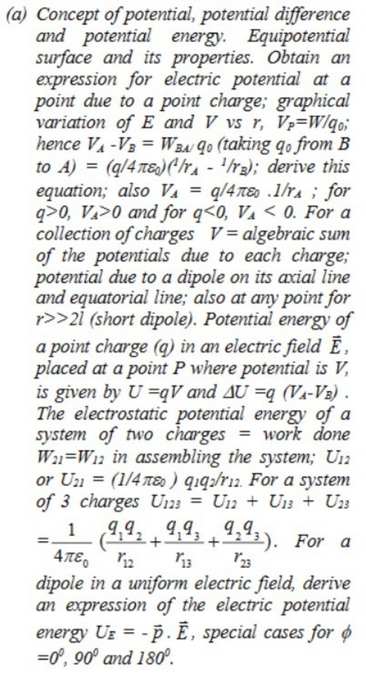 (c) The source of energy of a seat of emf (such as a cell) may be electrical, mechanical, thermal or radiant energy. The emf of a source is defined as the work done per unit charge to force them to go to the higher point of potential (from -ve terminal to +ve terminal inside the cell) so, ε= dW /dq; but dq = Idt; dW = εdq = εIdt . Equating total work done to the work done across the external resistor R plus the work done across the internal resistance r; εIdt=I2R dt + I2rdt; ε=I (R + r); I=ε/( R + r ); also IR +Ir = εor V=ε- Ir where Ir is called the back emf as it acts against the emf ε; V is the terminal pd. Derivation of formulae for combination for identical cells in series, parallel and mixed grouping. Parallel combination of two cells of unequal emf. Series combination of n cells of unequal emf.

(d) Statement and explanation of Kirchhoff's laws with simple examples. The first is a conservation law for charge and the 2nd is law of conservation of energy. Note change in potential across a resistor ΔV=IR<0 when we go ‘down’ with the current (compare with flow of water down a river), and ΔV=IR>0 if we go up against the current across the resistor. When we go through a cell, the -ve terminal is at a lower level and the +ve terminal at a higher level, so going from -ve to +ve through the cell, we are going up and

ΔV=+εand going from +ve to -ve terminal through the cell, we are going down, so ΔV = -ε. Application to simple circuits. Wheatstone bridge; right in the beginning take Ig=0 as we consider a balanced bridge, derivation of R1/R2 = R3/R4 [Kirchhoff’s law not necessary]. Metre bridge is a modified form of Wheatstone bridge, its use to measure unknown resistance. Here R3 = l1ρand R4=l2ρ; R3/R4=l1/l2. Principle of Potentiometer: fall in potential ΔV αΔl; auxiliary emf ε1 is balanced against the fall in potential V1 across length l1. ε1 = V1 =Kl1 ; ε1/ε2 = l1/l2; potentiometer as a voltmeter. Potential gradient and sensitivity of potentiometer. Use of potentiometer: to compare emfs of two cells, to determine internal resistance of a cell.

The ISC class 12 board exams are fast approaching and the datesheet is also out. Now is the right time to begin attempting the mock tests. It boosts confidence and provides students an idea of what and what not to do in the final exams. Check the ISC Class 12 mock tests below.

What topics are taught in the ISC Class 12 Physics syllabus?

The syllabus of ISC Class 12 Physics is larger than other boards and the topics taught in ISC Class 12 Physics syllabus include Electrostatics, Current Electricity, Magnetic Effects of Current and Magnetism, Electromagnetic Induction and Alternating Currents, Electromagnetic Waves, Optics, Dual, Nature of Radiation and Matter, Atoms and Nuclei, and Electronic Devices.