Matter in Our Surroundings: Important Questions and Preparation Tips

Here you can find the Science chapter, Matter in Our Surroundings, Important Questions & Preparation Tips for CBSE Class 9 Semester Assessments 2017-2018. The questions have been prepared to cover all the important topics of the chapter. Students can solve these questions to revise the chapter and track their preparation level for the next exams to come. 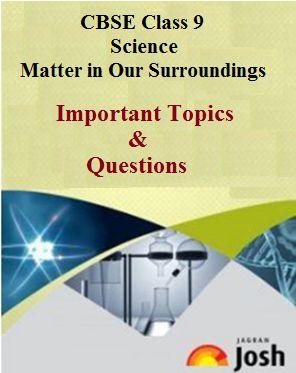 Get the CBSE Class 9th Science chapter, Matters in Our Surroundings: Important Topics and Questions. This will provide you with a very clear idea about what type of questions are being framed for the exam and from which topics. The pattern in which the Question Paper is set is quite different from the style in which the course structure is actually defined. Consider the below mentioned Important terms and Questions at the time of preparation.

• Difference among solid, liquid and gas.

• Classify the matter in terms of physical state and composition

• Simple and clear-cut definitions along with the differences between the following terms:

• Read clearly about the sublimation process.

• The smell of hot sizzling food reaches you several meters away, but to smell the cold food you have to get close to it. Give the logical explanation for the same

• What is Diffusion, and why gases diffuse rapidly?

• The mass per unit volume of a substance is called density (density=mass/volume). Arrange the following in order of increasing density:

• Explain the application of compressibility in gases with an example

• Mention the uses of LPG and CNG

• What is SI unit of temperature? Give mathematical relation also

• What is absolute temperature

• Which state of matter is most easily compressible

• A diver is able to cut through water in a swimming pool. Identify which property of matter is working here?

• Arrange the following substances in increasing order of intermolecular force of attraction:

• Give reasons to justify:

(a) Water at room temperature is in liquid form

(b) An iron almirah is in solid form

• Boiling is considered as bulk phenomenon. Why?

• Why does the temperature of a substance remains constant during melting and boiling even when heat is being supplied to it continuously?

• What factors affect the rate of evaporation?

• In which case evaporation of water will be faster; near the sea or far away from the sea?

• What do you mean by solid ice? Why CO2 is kept under low pressure?