Get here the easiest and simplest NCERT Solutions for Class 8 Social Science History Chapter 9 - The Making of the National Movement 1870s-1947. All the questions and answers are available here in PDF format. 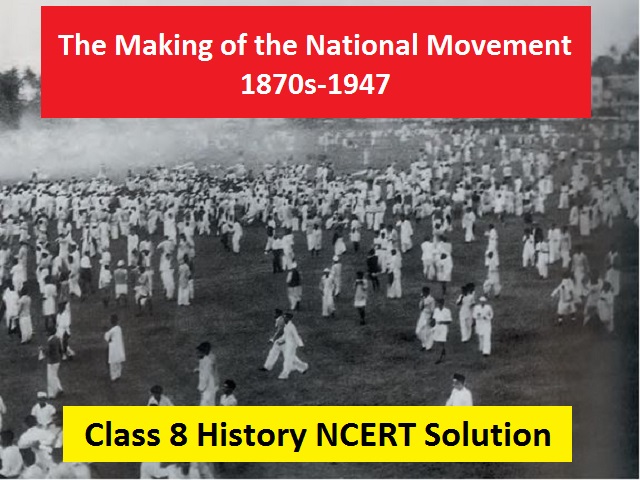 The people were dissatisfied with British rule in the 1870s and 1880s due to the following reasons:

2. Who did the Indian National Congress wish to speak for?

The Indian National Congress was composed of the representatives from all the sections of the Indian society. Therefore, the party wished to speak for all the people of the country.

3. What economic impact did the First World War have on India?

The First World War had the following economic impact on India:

4. What did the Muslim League resolution of 1940 ask for?

The Muslim League resolution of 1940 asked for “Independent States” for Muslims in the Eastern and North-Western areas of the country. The resolution did not mention partition or Pakistan.

5. Who were the Moderates? How did they propose to struggle against British rule?

The leaders of Congress in the first twenty years of its formation were termed as moderate. They proposed to struggle against the British in a non- violent manner. They wanted to develop public awareness about the unjust nature of British rule. They published many articles in the newspapers and journals highlighting about the increasing poverty of the country under the British rule. They criticised British rule in their speeches and sent representatives to different parts of the country to mobilise public support. They felt that the British had respect for the ideals of freedom and justice and so would accept the just demands of Indians. Therefore, their main aim was to express these demands and make the government aware of the feelings of Indians.

6. How was the politics of the Radicals within the Congress different from that of the Moderates?

The politics of the Radicals within the Congress were different from that of the Moderates in the following ways:

Radicals criticised the Moderates for their “policy of prayers”. They argued that instead of believing on the so called good intentions of the British, people should fight for swaraj.

They advocated mass mobilisation and boycott of British institutions and goods.

Moderates, on the other hand, proposed to struggle against the British in a non- violent manner. They wanted to follow the rules, the laws and the order posed by the British.

7. Discuss the various forms that the Non-Cooperation Movement took in different parts of India. How did people understand Gandhiji?

(i) At Kheda in Gujarat, Patidar peasants organised nonviolent campaigns against the high land revenue demand of the British.

(ii) In tea gardens of Assam, labourers demanded an increase in their pay.

(iv) In Guntur district of Andhra Pradesh, “forest satyagrahs” were staged by the tribals and poor peasants who grazed their cattle in the forests without paying the grazing fees.

(v) In Sind (now in Pakistan), Muslims supported the Khilafat and the non-cooperation movement.

(vi) In Bengal too, the Khilafat-Non-Cooperation alliance gave enormous communal unity and strength to the national movement.

(vii) In Punjab, the Akali agitation of the Sikhs demanded to remove corrupt mahants, supported by the British, from their gurdwaras.

(viii) In many other parts of the country, thousands of students left government schools. Many lawyers like Motilal Nehru, C.R. Das, C. Rajagopalachari and Asaf Ali gave up their practices. People surrendered their titles and boycotted legislatures. People lit public bonfires of foreign cloth.

People thought of Gandhiji as a kind of messiah, as someone who could help them overcome their misery and poverty. Peasants believed that he would help them in their fight against zamindars, and agricultural labourers believed he would provide them with the land.

8. Why did Gandhiji choose to break the salt law?

The British introduced a law stating that the Government had control over the manufacture and sale of salt. It also imposed a tax on the sale of salt. Mahatma Gandhi and other national leaders argued that salt was an essential item of our food and hence it was wrong to impose a tax on salt. Moreover, the issue of salt was related to all, the rich and poor. Hence, in 1930, Gandhiji declared that he would lead a march to break the salt law.

9. Discuss those developments of the 1937-47 period that led to the creation of Pakistan.

The developments of 1937-47 that led to the creation of Pakistan are mentioned below:

(i) A two-nation theory:  By 1930s, the League began to view the Hindus and the Muslims not as separate communities but as separate nations. Initially the Muslim league never mentioned Pakistan to be the nation of Muslims however, since the 1930s, it started demanding a separate country for Muslims.

(ii) Provincial elections of 1937: When the Congress formed government in seven out of eleven provinces in 1937 elections, League began to feel that the Muslims were a minority, and they would always have to play second fiddle in any democratic structure. It feared that Muslims may even go unrepresented.

(iv) Failed talks between Congress and League: At the end of the war in 1945, the British opened negotiations between the Congress, the League and themselves for the independence of India. The talks failed because the League saw itself as the sole spokesperson of India’s Muslims. The Congress could not accept this claim since a large number of Muslims still supported it.

(v) Success of league in Provincial elections of 1946: Elections were held in 1946 to the provinces. League performed extremely well in the seats which were reserved for the Muslims. It thus gave them the confidence to create a separate state of Pakistan.

(vi) Failure of Cabinet Mission Plan in 1946: In March 1946 the British cabinet sent a three-member mission to Delhi to examine this demand and to suggest a suitable political framework for a free India. Cabinet Mission Plan suggested against the partition though it suggested some degree of autonomy for the Muslim majority areas. However, some of its proposals on independence were rejected by both congress and the League.

(vi) Mass agitation: After the failure of the Cabinet Mission Plan, the League organised full scale movement to demand the formation of separate state for the Muslims. It declared 16 August 1946 as the ‘Direct Action Day’, in which riots broke out in many parts of the country including Calcutta which resulted in the death of thousands of people.

(vii) Eventually, partition was finalised and Pakistan was born.