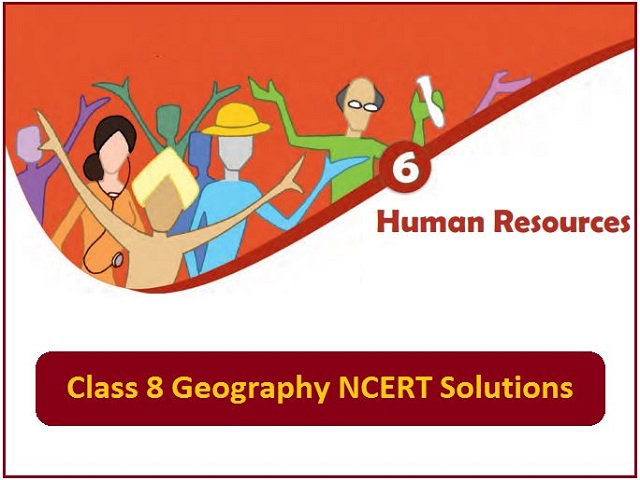 NCERT Solutions for Class 8 Social Science Geography Chapter 6 - Human Resources are very helpful for completing your homework assignments and preparing for your school as well as competitive exams. We have provided here precise and comprehensive answers to all questions given in Chapter 6 of the latest edition of Class 8 Geography Textbook. We suggest all of you to follow the latest NCERT book and solutions for effective learning. You can download all the question and answers from here in PDF format.

(i) Why are people considered a resource?

People are the greatest resource of the nation since they can make the best use of nature to create more resources when they have the knowledge, skill and technology to do so. It is people with their demands and abilities that help in extracting the usefulness of all other resources.

(ii) What are the causes for the uneven distribution of population in the world?

Population distribution in the world depends on various factors like geographical, social, cultural and economic factors.

(iii) The world population has grown very rapidly. Why?

The world population has grown very rapidly due to the advancements in science and technology that in turn resulted in increased food production and development in healthcare facilities. All this has helped in reducing death rate.

Death rate is the number of deaths per 1,000 people.

(v) What is meant by population composition?

Population composition refers to the structure of the population of a particular region. It helps us to know the number of males or females in the population, their age, qualification, occupations, income status and health conditions.

(vi) What are population pyramids? How do they help in understanding about the population of a country?

(i) What does the term ‘population distribution’ refer to?

(a) How the population in a specified area changes over time.

(c) The way in which people are spread across a given area.

Answer: (c) The way in which people are spread across a given area

(ii) Which are three main factors that cause population change?

(a) Births, deaths and marriage

(b) Births, deaths and migration

Answer: (b) Births, deaths and migration.

(iv) What is a population pyramid?

(a) A graphical presentation of the age, sex composition of a population.

(b) When the population density of an area is so high that people live in tall buildings.

Answer: (a) A graphical presentation of the age, sex composition of a population

3. Complete the sentences below using some of the following words.

When people are attracted to an area, it becomes densely populated, Factors that influence this include favourable climate; good supplies of natural resources and fertile land.