Another feather in the cap for Aakash BYJU’S: Students from the cohort secure top ranks in NEET-UG and JEE Advanced 2022

Jagran Josh
Another feather in the cap for Aakash BYJU’S

Aakash BYJU’S NEET-UG and JEE (Advanced) results in 2022 have been exceptional across 290+ branches and centres in India. This includes 18 State/UT Toppers in NEET-UG 2022 and zone toppers from multiple zones in JEE (Advanced) 2022.

Aakashians have outshined themselves by bagging 5 ranks in the top 10 AIR in NEET 2022, including  AIR 2, AIR 3, AIR 9 and AIR 10 (Classroom Program students) With that, Aakash BYJU’S continues to maintain its legacy of achieving top AIRs in NEET-UG. 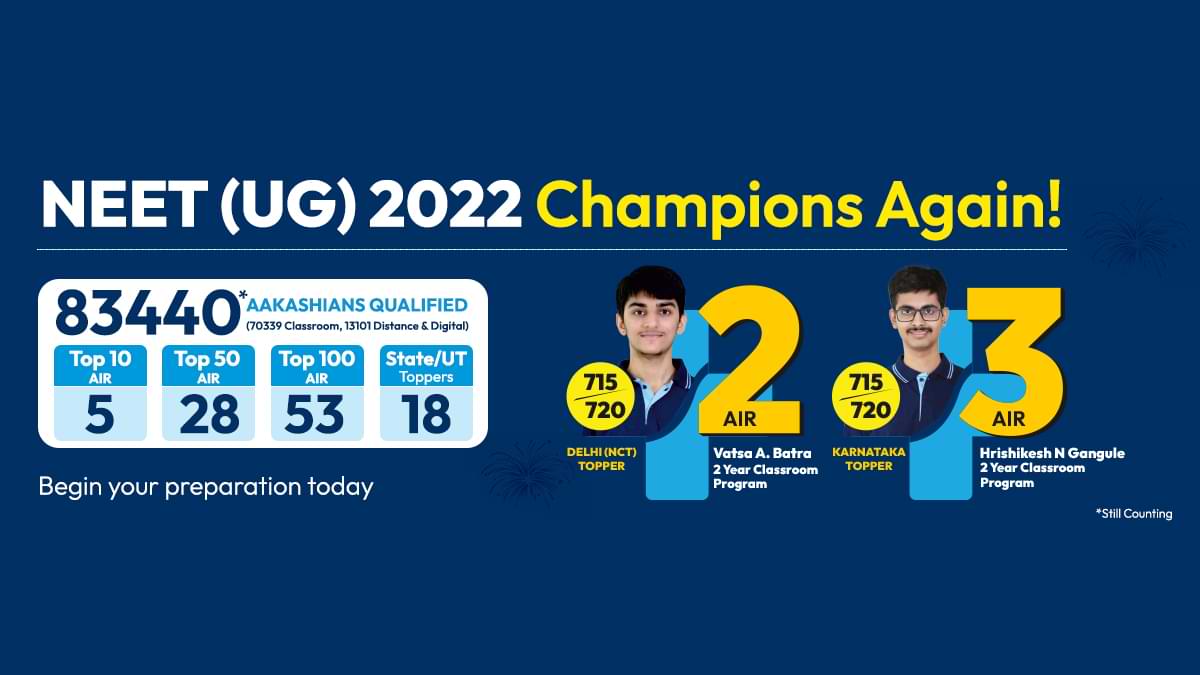 Aakash BYJU’S 2-Year Classroom Program student - Kanak Barfa, has secured AIR 189 in JEE (Advanced) 2022. He is in the Top 5 in IIT Kanpur Zone.

The incredible performance of the students is attributed to the focused, disciplined and competitive learning environment at Aakash BYJU’S, which is backed by comprehensive study material, a rigorous test & assessment schedule and a student-first approach.

Talking about her achievement, Tanishka Kabra, AIR 1 in JEE Advanced 2022, said, “I would rely on my teachers. So, they would suggest to me, okay, this might work well for you, and this might work well for you. So, I trusted them, and I followed what they said.” Jaladhi Joshi, AIR 32-IIT Bombay Zone Topper- JEE Advanced 2022, said, “The one strategy that was the same throughout was that nothing was more important than practising the previous years’ papers. Even if it was the All India Aakash Test Series (AIATS), then I used to practise the previous years’ papers of AIATS as well. So, in any exam, I would follow the previous year’s papers more than anything.”

Over the years, Aakash BYJU’S has been consistently delivering impressive performance in NEET-UG and JEE, thereby cementing its position as one of India’s leading coaching institutes for medical and engineering entrance exam preparation. This year also, Aakash BYJU’S continues to maintain its legacy of delivering excellence by achieving Top AIRs in both NEET-UG 2022 and JEE (Advanced) 2022.

If you dream of a career in medicine or engineering and want to qualify in NEET-UG or JEE (Main & Advanced) with flying colours, you can consider joining Aakash BYJU’S and start your preparation for NEET-UG 2023 or JEE (Main & Advanced) 2023 from today itself. Admissions to Aakash BYJU’S Repeater Courses are now open. For more details, click here.

Their journeys inspire aspirants with their courage and perseverance, which reminds them that obstacles can also be overcome when you have just one person cheering you on to the finish line. Watch their inspiring success stories:

This remarkable feat could be possible with the consistent hard work and relentless efforts of the students and the faculty at Aakash BYJU’S. Needless to say, all the students started preparing for NEET or JEE (Main & Advanced) amid the COVID-19 pandemic. However, Aakash BYJU’S transitioned from offline to online mode to ensure students’ preparations do not get hampered. Whether delivering lectures using MS Teams, offering access to recorded video lectures, introducing an online testing system or offering 24/7 online doubt resolution, Aakash BYJU’S made every effort possible to offer students a seamless and brilliant learning experience. And it continues to do so. Putting students first and striving hard to meet their expectations is core to Aakash BYJU’S.

Note: The article is written by the Brand Desk.