Number of applicants for JEE Main decreased in 2015

The number of aspirants for JEE Main-2015 decreased by over 50,000 this year. Around 13 lakh applicants registered for this exam in 2015.

In the last five years it is for the very first time that the number of applicants for all-India engineering entrance exam JEE Main have dropped in 2015. The number of applicants for JEE Main-2015 decreased by over 50,000 this year. JEE Main is the first round of test for admission to undergraduate engineering courses (B.Tech.) Around 13.03 lakh students registered for JEE Main whereas for last year, the number of applicants for the exam was 13.56 lakh.
Though it is very early to predict but it can be considered as an indication of saturation and waning interest in engineering. A large number of engineering seats remain vacant in the engineering colleges of every state last year.
The last day for registration for JEE (Main) was on December 18th, but the dates were extended up to December 27th and for candidates opting centres in Manipur the dates were extended upto January 10th, 2015 as the manipur had recently joined the national-level engineering entrance exam.
There is a slight increase in the number of candidates registered for the JEE Main online (computer based) exmination. Out of the total 1.86 lakh students choose to appear for the JEE Main-2015 online exam whereas in 2014 1.71 lakh students registered for the online examination.
Current format of exam was adopted in the year 2013, before that there were two exams, IIT-JEE and AIEEE. In 2013 these two exams were combined and admission to various engineering colleges is done through JEE Main & JEE Advanced. For the last few years, JEE Main and before that, the AIEEE, has always recorded a rise in the numbers of aspirants. In 2013, 12.82 lakh had registered for JEE Main. For IIT-JEE, the registrations were 3.21 lakh in 2008 whereas 5.07 lakh  candidates registered for IIT-JEE in 2012. After the introduction of two-tier system in which the top 1.5 lakh students from JEE Main have been shortlisted for JEE Advanced.
Following graph clearly indicates the number of students registered for the IIT-JEE or JEE Main in last few years. 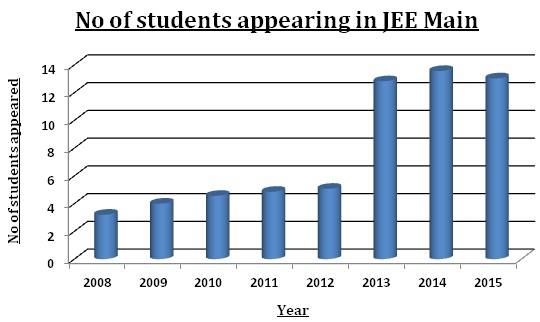