SSC is well known for the recruitment of Group ‘B’ and ‘C’ posts under the Ministries/Departments in The Government of India. SSC organizes various examinations like Combined Graduate Level examination, Combine Higher Secondary Level, Stenographer and for SI/DP/CAPF, etc.

SSC is well known for the recruitment of Group ‘B’ and ‘C’ posts under the Ministries/Departments in The Government of India. SSC organizes various examinations like Combined Graduate Level examination, Combine Higher Secondary Level, Stenographer and for SI/DP/CAPF, etc., throughout the year having almost the same Exam Pattern. The Exam paper is comprised of basically 4 subjects.

So, Jagranjosh.com has introduced a brief plan for revising topics at the time of examination. In this article, Number System which sometimes appear more difficult to understand in terms of  Human Relationship.

Number is a symbol which represents quantity. There are three types of numbers:

1. Real Numbers: Real numbers are those numbers which can be easily indentify and quantify.

2. Imaginary Numbers: Imaginary numbers are those numbers which we can just imagine but cannot physically perceive.

Here we will only discuss  about the real numbers .

Types of Real Numbers: there are two types of real numbers

Again Rational numbers are classified as:

(a) Integers: All rational numbers which do not have decimal or fractional parts are called integers.

On the basis of origin:

1. Prime Numbers: All the natural numbers greater than 1 which are only divisible by 1 and the number itself are called prime numbers.

2. Composite Numbers: All the natural numbers greater than 1 which are divisible by at least one more number other than 1 and the number itself are called composite numbers.

Note: 1 is neither a prime number nor a composite.

On basis of divisor:

1. Even Numbers: All the natural numbers which are multiple of 2 are called even numbers.

Odd Numbers: All the natural numbers which are not a multiple of 2 are called odd numbers. They are denoted as 2k ± 1, where k is a natural number.

To find whether a number is prime or not.

Step 1: Find the approximate square root of a number .

Step 2: Check if any prime number from 2 to that square root divides that number or not.

Conversion of recurring decimal into fraction. 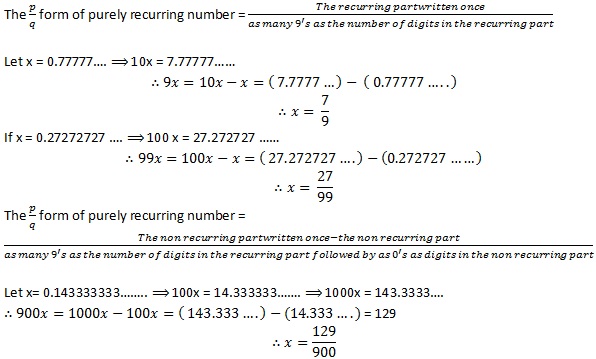 1. When X is subtracted from the numbers 9, 15 and 27, the remainders are in continued proportion. What is the value of X?

3. Rachita enters a shop to buy ice-creams, cookies and pastries. She has to buy at least 9 units of each. She buys more cookies than ice-creams and more pastries than cookies. She picks up a total of 32 items. How many cookies does she buy?