Read this article to get acess to WBJEE 2014 Solved Question Paper. This paper consists of 5 questions (#16 to #20) from WBJEE 2014 Physics paper. Detailed solution of these questions has been provided so that students can match their solutions. WBJEE is a common entrance examinations held at state level for admission to the engineering and medical courses.

Find WBJEE 2014 Solved Physics Question Paper – Part 4 in this article. This paper consists of 5 questions (#16 to #20) from WBJEE 2014 Physics paper. Detailed solution of these questions has been provided so that students can match their solutions.

WBJEE is a common entrance examinations held at state level for admission to the undergraduate level engineering and medical courses in the state of West Bengal. The Mathematics section of WBJEE 2014 engineering entrance exam consists of 40 questions.

16. A particle moves with constant acceleration along a straight line starting from rest. The percentage increase in its displacement during the 4th second compared to that in the 3rd second is 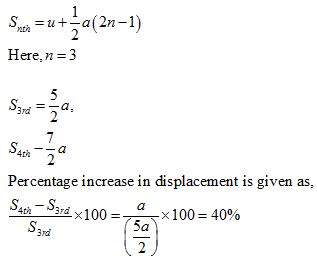 17. In the circuit shown assume the diode to be ideal. When Vi increases from 2 V to 6 V, the change in the current is (in mA)

Initially when Vi is 2V then the diode is in reverse biased condition and no current flows through the circuit.

When Vf is 6V, then the diode is in forward biased condition and hence the current flowing through the circuit is given as:

18. In a transistor output characteristics commonly used in common emitter con ig ration, the base current IB, the collector current IC and the collector-emitter voltage VCE have values of the following orders of magnitude in the active region

The order of magnitude of IB is in μA, and IC is in mA and VCE in Volts in common emitter transistor.

19. If n denotes a positive integer, h the Planck’s constant, q the charge and B the magnetic field, then the quantity

has the dimension of

20. For the radioactive nuclei that undergo either α or β decay, which one of the following cannot occur?

(A) isobar of original nucleus is produced

(B) isotope of the original nucleus is produced

Isotope of the original nucleus cannot be produced for the radioactive nuclei that undergo either α or β decay.