Why is water a good solvent?

In this article you will come to know about the reason that why  is water a good solvent.

Q. Why is water a good solvent? 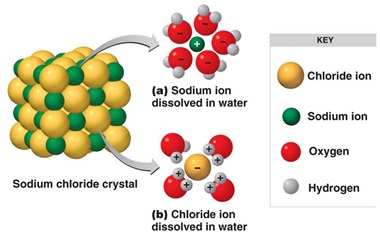 Ans. The property of water being a very good solvent is mainly related to its polarity. The water molecule has an asymmetrical distribution of charge over oxygen and hydrogen atoms. The hydrogen atoms of each water molecule carry a slight positive charge, while the oxygen side carries a slight negative charge. This property of water by which it exhibits two oppositely charged ends is known as polarity. When an ionic or polar solute enters water, it gets surrounded by a number of tiny water molecules. The positive part of the ionic solute is attracted to the negatively charged oxygen side of the water while the negative part of the solute is attracted to the positively charged hydrogen side of water, hence causing the solute to dissociate into its constituent ions.