Nine out of the top 10 most polluted cities are in India, stated air quality tracker IQAir. In 2020, India accounted for 46 of the world’s 100 most polluted cities followed by China (42 cities), Pakistan (6 cities), Bangladesh (4 cities), Indonesia (1 city), and Thailand (1 city). All these cities reported a PM2.5 air-quality rating of over 50. Hotan in China’s Xinjiang reported the worst air quality average at 110.2 in 2020. Air pollution presents one of the world’s biggest health hazards causing about 7 million premature deaths annually including 6 lakh children. Air pollution is expected to cost the global economy upwards of $2.9 trillion per year (3.3 per cent of global Gross Domestic Product) due to emissions from fossil fuel burning alone.

Also read: What is a 10-point action plan against air pollution announced by Delhi Government? 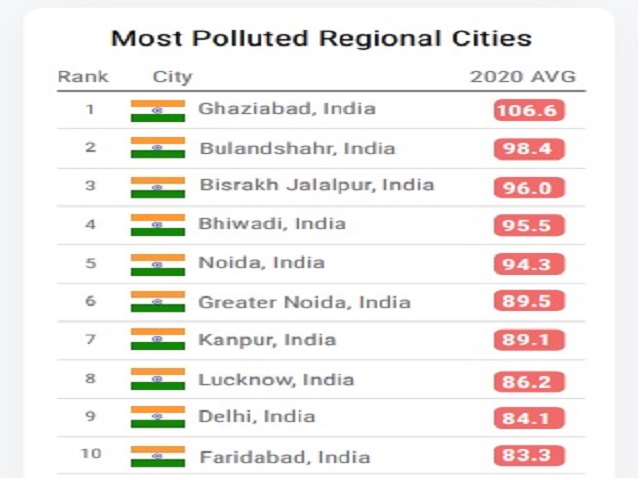 The 2020 World Air Quality Report analyses PM2.5 data gathered by ground-level monitoring stations around the world. The report includes data for 106 countries, up from 98 countries in 2019 and 69 countries in 2018.

Among criteria pollutants commonly measured in real-time, fine particulate matter (PM2.5) is currently understood. PM2.5 is defined as ambient airborne particulates that measure up to 2.5 microns in size. The most common human-made sources include fossil-fuel-powered motor vehicles, power generation, industrial activity, agriculture, and biomass burning. As per WHO Air Quality Guideline, the annual exposure of PM2.5 below 10 μg/m³ minimizes risks.

How is air quality determined?