Panneerselvam is tasked to look after Finance of the state besides Housing, Rural Housing and Housing Development, Slum Clearance Board and Accommodation Control, Town Planning, Urban Development and CMDA. 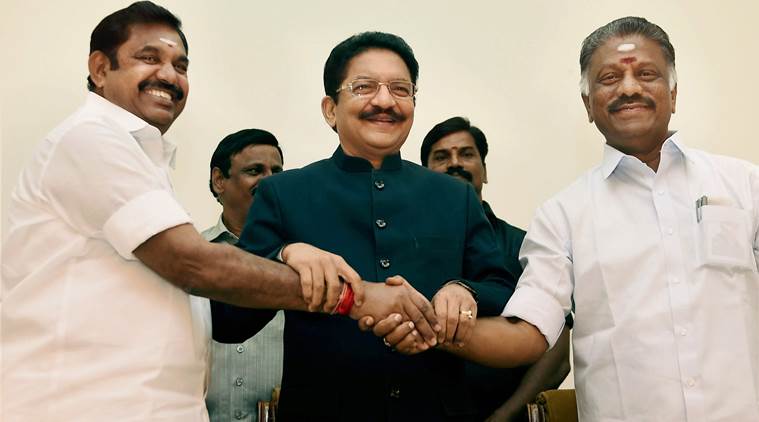 O Panneerselvam sworn in as Deputy CM of Tamil Nadu

O Panneerselvam was on 21 August 2017 sworn in as the Deputy Chief Minister (CM) of Tamil Nadu, following the much speculated merger of All India Anna Dravida Munnetra Kazhagam (AIADMK) factions.

He was administered oath by Governor Vidyasagar Rao at Raj Bhavan. Meanwhile, Edapaddi Palaniswamy will continue to stay on as the Chief Minister of the state.

Panneerselvam is tasked to look after Finance of the state besides Housing, Rural Housing and Housing Development, Slum Clearance Board and Accommodation Control, Town Planning, Urban Development and CMDA.

Moreover, Panneerselvam adviser K Pandiarajan was inducted in the Cabinet. Pandiarajan was given responsibility of Tamil Official Language and Tamil culture, besides Archaeology, that were up till now held by Sevoor S Ramachandran and K A Sengottaiyan respectively.

Merger of AIADMK factions
The two factions of the AIADMK merged six months after their split following the death of then Chief Minister J Jayalalithaa. Panneerselvam was appointed as the Coordinator of the merged AIADMK.

On the other hand, Chief Minister K Palaniswami will be the Joint Coordinator of the merged party.

The factional feud of AIADMK began in February 2017 after Panneerselvam revolted against VK Sasikala. Following the feud, Panneerselvam resigned as the Chief Minister of the state. Moreover, he was immediately discharged from the top party position of a 'Treasurer'.

Consequently, Sasikala named Palaniswami as Legislature Party Leader as she had to go to Bengaluru to serve a prison sentence following her conviction in the disproportionate assets case.