The swearing-in comes a mere few days after the Kamal Nath-led Congress government lost its majority in the state. Kamal Nath had resigned from the post of CM on March 19, ahead of the scheduled floor test.

The swearing-in ceremony was extremely low-key with no major central BJP leaders. It was conducted at a short notice so that the new Chief Minister can take charge as soon as possible to put in action the required measures to tackle the spread of COVID-19 infection. 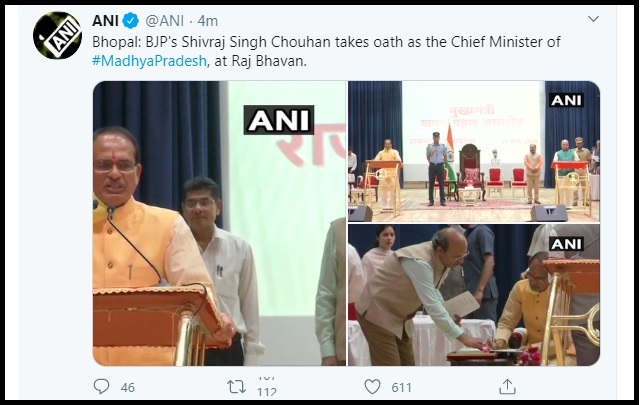 Who is Shivraj Singh Chouhan?

• Born on March 5, 1959, Shivraj Singh Chouhan is a senior leader of the Bharatiya Janata Party. He had joined the Rashtriya Swayamsevak Sangh in 1972 at the age of 13 years.

• He is a five-time member of the Parliament, representing Vidisha constituency in the Lok Sabha between 1991 and 2006.

• He is currently a member of the legislative assembly from Budhni constituency of Madhya Pradesh.

• He took over as new Chief Minister of Madhya Pradesh following the resignation of incumbent Kamal Nath. This is Chouhan’s fourth term as CM.

The Kamal Nath-led Congress government lost its majority in Madhya Pradesh after its senior leader Jyotiraditya Scindia defected from the party and 22 MLAs allegedly loyal to him also sent in their resignations.