Sonia Gandhi has been re-elected as chairperson of the Congress's lawmakers who won the Lok Sabha election 2019. Rahul says " 52 Congress Mps are enough to make BJP jump everyday." 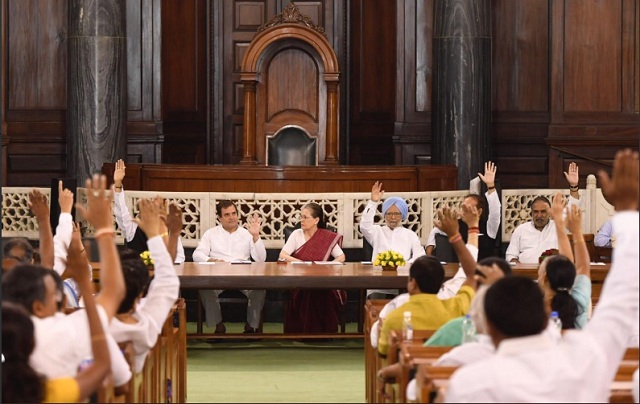 Now, all eyes are on whom Sonia Gandhi will name as the leader of Congress party in parliament. Congress' Mallikarjun Kharge was the leader of Congress during the 16th Lok Sabha. However, Kharge who was a nine-time legislator and two-time MP, lost his Gulbarga seat in Karnataka in Lok Sabha Elections 2019.
Why is Congress not the leader of the opposition in 17th Lok Sabha?
The Congress party fell three-members short to be qualified as the leader of the opposition in the new parliament. Congress' dismal performance in the recently concluded elections has left the party with just 52 lawmakers this time, which is though higher than the party's numbers in the 2014, which was 44.
Will Rahul Gandhi be the leader of Congress in the parliament?
As per sources, Rahul Gandhi, who is determined to step down as Congress Party President, is likely to be made the new leader of Congress in the parliament.
This is his first meeting with Congress leaders since he announced his decision to step down as the president of the party. Gandhi had asked the Congress Working Committee last Saturday to chose a non-Gandhi member to succeed him. The Congress has so far, refused to accept his resignation and there has been no further development on the issue.

While addressing the Congress leaders at the Congress Parliamentary Party (CPP) meeting, Rahul Gandhi said, "We are 52 MPs. I guarantee you that these 52 MPs will fight against BJP every single inch. We are enough to make BJP jump everyday."

Sonia Gandhi on being re-elected as leader of Congress Parliamentary Party!
Speaking during the Congress Parliamentary Party meeting, Sonia Gandhi thanked "12.13 Cr voters for reposing faith in the Congress Party, pointing to the fact that even in defeat, the party has a sizeable voter base." She also thanked Rahul Gandhi "for toiling night and day and taking on the Modi government... raising concerns about all sections of society and helped the party win in Madhya Pradesh and Chhattisgarh and Rajasthan".