The EC stated that any biopic with the potential to disturb level playing field during elections, should not be displayed in electronic media including cinematograph during the operation of MCC. 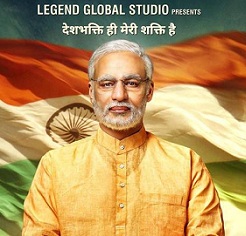 The Election Commission of India on April 10, 2019 banned the release of any biopic, including a film on Prime Minister Narendra Modi, which was scheduled to release on April 11, the same day when the seven-phase Lok Sabha elections are scheduled to begin.

The EC said in a statement that any biopic material in nature of biography subserving the purpose of any political entity or any individual entity connected to it, which has potential to disturb level playing field during the election, should not be displayed in electronic media including cinematograph during the operation of the Model Code of Conduct.

The Election Commission in its order stated:

1. Any biopic material in nature of biography subserving the purpose of any political entity or any individual entity connected to it, which has potential to disturb level playing field during the election, should not be displayed in electronic media including cinematograph during the operation of the Model Code of Conduct.

2. Any poster or publicity material concerning any certified content, which either depicts a candidate for the furtherance of electoral prospect, directly or indirectly, shall not be put to display in electronic media in the area where MCC is in operation.

3. Any poster or publicity material concerning any such certified content, which either depicts a candidate for the furtherance of electoral prospect, directly or indirectly, shall not be put to display in print media, without the prescribed instructions of pre-certification in the area where MCC is in operation.

4. Any cinematograph material, certified by the appropriate authority, if there exists such a violation or on receipt of complains in this regard, shall be examined by a committee duly constituted by the commission, which will then suggest appropriate action. The EC stated that the committee would be headed by a retired Justice of the Supreme Court or retired Chief Justice of any High Court.

• The Election Commission stated that the creative contents that are claimed to either diminish or advance the electoral prospect of a candidate or a political party in the garb of creative freedom are a kind of surrogate publicity by the candidate or the political party during the period of MCC.

• The commission stated that though the display materials claim to be a part of creative content, it is contended that these have propensity and potentiality to affect the level playing field, which is not in consonance with the provisions of the Model Code of Conduct.

• The commission further stated that as these contents are incorporated in the storyline of the programmes being shown and there would be difficulty in proving the payment of money, they may not fall under the category of ‘advertisement’ strictly and may remain outside the purview of MCC certification requirement and thereby evade the directive given by the Supreme Court.

• According to the commission, such political contents pose a serious threat to the level playing field, as they may create an impression of the truthfulness of such content being shown through television, cinema, internet-based entertainment programmes or the social media.

• Therefore, the commission felt that in the larger interest of conducting free and fair elections, such political content ought to be regulated during the election period to prevent violation of the MCC.

On April 9, 2019, the Supreme Court had dismissed a petition filed by a Congress activist seeking a stay on the film's release, saying the Election Commission would be an appropriate place to seek the redressal.

Under Article 324 of the constitution, superintendence, directions and control of elections are bestowed upon the commission and it is its main duty to take necessary measures to create a level playing field and provide a conducive electoral environment to all the stakeholders.

The film, titled "PM Narendra Modi" and directed by Omung Kumar, has been criticised by the opposition parties, who claim that the biopic could give undue advantage to the BJP in the polls as it will arrive in theatres before the 2019 Lok Sabha elections.

The Election Commission of India on April 9, 2019 reportedly directed the Chief Electoral Officer of Delhi to ensure that the contents of NaMo TV are pre-certified by the local media certification and monitoring committee.

The local media certification committees are formed at district and state levels during polls and their key role is to clear political campaign and advertisements.

• The Election Commission had issued a notice last week, seeking a report from the information and broadcast ministry on NaMo TV, after opposition parties, including the Congress, asked the poll body to direct the ministry to suspend the channel in violation of the Model Code of Conduct.

• The EC has also asked the CEO to inform whether the political contents were at anytime cleared by the certification committee.

• The Information and Broadcasting Ministry reportedly responded stating that the NaMo TV is an advertisement platform launched by DTH service providers, which does not require government nod.

• The ministry also reportedly said that NaMo TV is not a regular channel and it does not figure in the official list of approved channels of the I&B Ministry.

• It also stated that as per the existing norms, no approval is required from the ministry to run such advertising platforms.

The Election Commission also reportedly raised an issue with Doordarshan for giving ‘excessive coverage’ to the party in power. The commission has asked the channel to give balanced airtime coverage to all political parties.

NaMo TV was launched on March 31, 2019, just weeks ahead of the Lok Sabha General Elections. The channel features Modi’s speeches and BJP-centric content.