Rajnath Singh will be performing a Shastra Puja in France after receiving India’s first Rafale fighter jet, on the occasion of Vijayadashami. 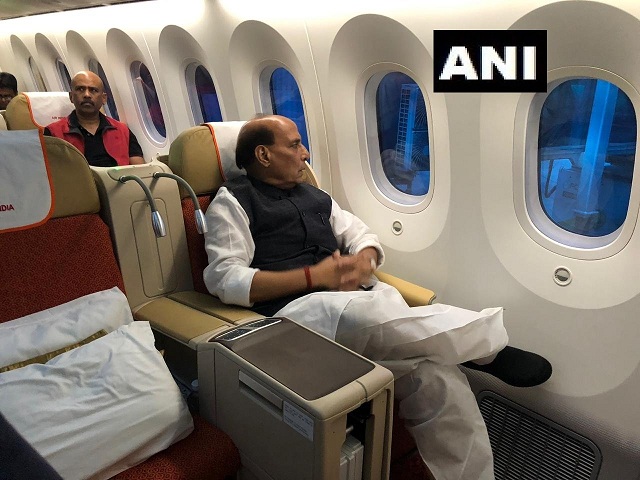 Defence Minister Rajnath Singh will be performing a Shastra Puja in France after receiving India’s first Rafale fighter jet. The jet would be the first of the 36 fighter jets that were agreed upon in the Rafale deal signed between India and France.

Rajnath Singh will be receiving the Rafale jet in Bordeaux, the French port city on October 8, 2019. The Union Minister will first perform the Shastra Puja and then take a sortie in the aircraft, to understand the workings of all its features.

The Union Defence Minister left India on October 7 for a three-day visit to France. The primary objective of the Defence Minister’s trip is to receive the first of the 36 Rafale fighter jets.

Also read: Rafale Combat Aircraft: Everything you need to know!

Rajnath Singh is scheduled to meet French President Emmanuel Macron in Paris before heading to Bordeaux to receive the fighter aircraft. During the meeting, the two leaders are expected to discuss issues relating to defence and security.

Rajnath Singh would be receiving the fighter jet on behalf of India on the foundation day of the Indian Air Force. As the festival of Dussehra (Vijayadashami ) would also be celebrated across India on the same day, Singh will be performing the Shastra Puja in France.

The Defence Minister has been performing the 'Shastra Puja' on Dussehra for the past couple of years including when he served as the Union Home Minister under the first Modi Government. He will be performing the Shastra Puja this at the Merignac suburb of Bordeaux after receiving the first Rafale fighter jet. After the puja, he will take a sortie in the aircraft.

The Rafale handover ceremony is expected to take place at Merignac of Bordeaux, a facility of Dassault Aviation, located at about 590 km away from Paris. Rajnath Singh will be participating in the ceremony along with the French Minister of Armed Forces, Florence Parly.

Though Rajnath Singh will be receiving the first of the 36 Rafale jets on October 8, the first batch comprising four Rafale jets will arrive in India only by May 2020.

Following the handing over ceremony, Singh would be conducting the annual defence dialogue with the  French Minister of Armed Forces during which, both sides will discuss ways to further deepen India and France’s security and defence ties.

India and France had signed an inter-governmental agreement for the procurement of 36 Rafale fighter jets at a cost of around Rs 59,000 crore in September 2016.

Rafale is a multi-role combat aircraft with twin engines, designed and built by Dassault Aviation. The aircraft is considered to be one of the most powerful combat jets globally.

The aircraft is capable of carrying a wide range of weapons and missiles, which are intended at performing air supremacy, in-depth strike and anti-ship strike and also nuclear deterrence missions.

The IAF has already readied the required infrastructure and trained its pilots to welcome the fighter aircraft. Several teams from the Indian Air Force visited France earlier to assist Dassault Aviation to incorporate India-specific enhancement on-board the fighter aircraft.