Rios Montt and his spy chief Jose Rodriguez were accused of devising the assassination of indigenous population by collaborating with leftwing guerrillas, who were already waging war against government forces. 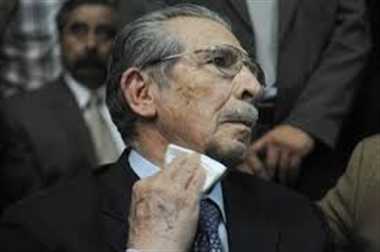 Former military dictator Efrain Rios Montt, who ruled Guatemala between 1982 and 1983 and was accused of genocide, passed away on April 1, 2018. He was 91.

Rios Montt was held responsible for the murders of 1771 indigenous Ixil-Maya people during his short reign in Guatemala, The incident took place in the wake of the 36-year civil war.

• According to the United Nations, around 200000 people died or were made to disappear during the Guatemala's long, brutal civil war, which ended in 1996.

• Rios Montt and his spy chief Jose Rodriguez were accused of devising the assassination of indigenous population by collaborating with leftwing guerrillas, who were already waging war against government forces.

• A trial, held in May 2013, delivered a conviction against Rios Montt. It was the first time that a Latin American ex-dictator was convicted of genocide.

• However, the verdict was reversed just days later by Guatemala's Constitutional Court due to the 'procedural error' and a new trial was ordered.

• The trial of Rios Montt was halted in 2016 after the Appeals Court ruled that each man should be tried separately.

• However, later the lawyers of Rios Montt sought to block further proceedings, citing his poor health.

• Rios Montt managed to remain a public figure by running for presidential elections in 1990 and 2003. He served several terms in Congress, which gave him immunity from prosecution.

• However, with the expiry of his last term in 2012, he lost all the immunity.

• Montt's trial opened in January 2013 where he and his former chief of intelligence Jose Rodriguez were charged with responsibility for massacres in 15 Ixil Maya villages in which 1771 men, women and children were killed.

• Rios Montt was born in Guatemala's Huehuetenango province, near the border with Mexico.

• He joined the army as a teenager and received training courses at the US-run School of the Americas in the Panama Canal Zone, where Latin American officers were taught harsh tactics used on rebels.

• Montt came to the forefront in politics in 1974 as a brigadier general, when his name was put forward as a coalition presidential candidate.

• He won an overwhelming victory, but electoral fraud prevented him from taking office. Later, as a consolation prize, Montt was sent to Spain as the military envoy.

Efrain Rios Montt's rule as the dictator of Guatemala

During his 18-month rule, Rios Montt adopted a ruthless policy against dissidents, wiping out the entire rural towns where leftists were suspected of living.

During the first five months of his power, soldiers killed more than 10000 peasants. Hundreds of thousands fled their homes, many of them took refuge across the border in Mexico. Nearly all victims were of Ixil ethnic group, a Mayan Indian community.

Due to the mounting gross human rights violations, Rios Montt was easily ousted by his Defence Minister General Oscar Mejia in August 1983.

In 1989, Rios Montt founded the Guatemalan Republican Front (FRG), which reached national power with the election of Alfonso Portillo, who served during 2000-2004.

However, Portillo was arrested in 2010 on corruption charges and was expelled to the United States, where he spent over a year in prison.