Former Indian pacer RP Singh has announced his retirement from all forms of cricket. His international career spanned a period of six years and he played 82 matches across all three formats and picked up over 100 wickets.

Former Indian pacer Rudra Pratap Singh on September 4, 2018 announced his retirement from all forms of cricket through his social media account. His international career spanned a period of six years and he played 82 matches across all three formats and picked up over 100 wickets.

Announcing his retirement, Singh wrote on his Twitter account,"13 years ago today, on 4th September 2005 was the first time I donned the Indian jersey. It was the stepping-stone to what would become the most cherished moments of my life. Today as I hang my boots and call it a day, I wish to remember and give thanks to each and everyone who made this journey possible.” 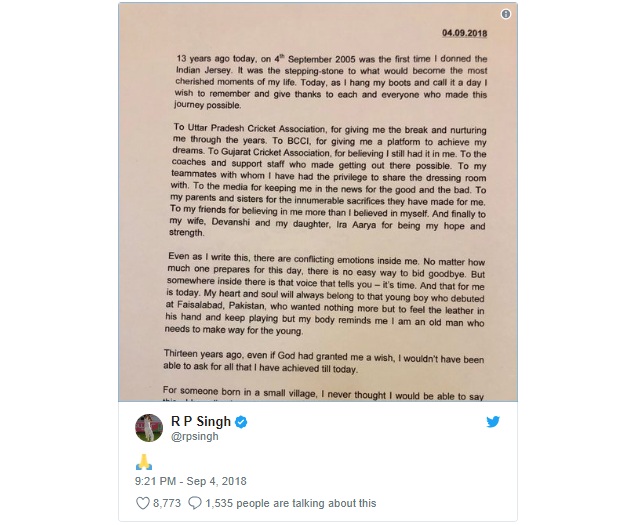 • RP Singh played 14 Tests, 58 one-day internationals and 10 T20 Internationals for India after making his international debut in an ODI against Zimbabwe in Harare exactly 13 years ago.

• He last featured in an international game in an ODI against England in Cardiff on September 16, 2011 and finished his international career with 124 wickets to his name.

• Post his international cricketing days, he continued to play at the domestic level and went on to have a successful first-class career where he picked up 301 wickets in 94 games at an average of 30.57, of which 209 came in the Ranji Trophy.

• After spending over 10 years with Uttar Pradesh, Singh shifted to Gujarat and won the Ranji Trophy in 2016-17. He played his last first-class game in 2017, representing Gujarat in the final against Mumbai, where he picked up four wickets.

• Since the past few years, Singh had taken up TV commentary and has made regular appearances during the IPL broadcasts.