PM Modi presented a 9-point agenda to G20 Member Nations, calling for strong and active cooperation to deal with fugitive economic offenders. The agenda was presented during the second session of the G20 Summit 2018 on International Trade, International Financial and Tax Systems.

The G20 Summit 2018 concluded on December 1, 2018 in the city of Buenos Aires, Argentina. Nineteen leaders of the world's biggest economies and representatives of the European Union held a meeting together as part of the G20 summit.

It was the 13th meeting of Group of Twenty (G20) and the first G20 summit to be hosted in South America. President Mauricio Macri of Argentina assumed the presidency of G20 on November 30, 2017 for one year during an official ceremony in Kirchner Cultural Centre in Buenos Aires, Argentina.

The leaders of the Group agreed to fix the world trading system, however, only 19 agreed to support the Paris accord on fighting climate change with the United States holding onto its withdrawal.

PM Modi presented a 9-point agenda to G20 Member Nations, calling for strong and active cooperation to deal with fugitive economic offenders. The agenda was presented during the second session of the G20 Summit 2018 on International Trade, International Financial and Tax Systems.

On the sidelines of the G-20 summit, the Prime Minister met Chinese President Xi Jinping and discussed how to strengthen bilateral ties between the two neighbours. He also met Prince Mohammed bin Salman of Saudi Arabia who offered to supply oil to India. 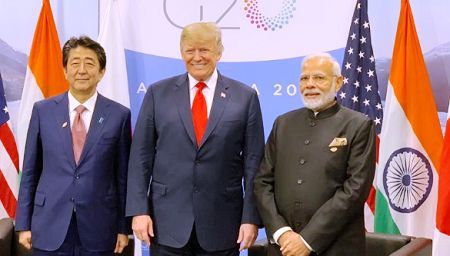 PM Modi quoted that, "The 'JAI' (Japan, America, India) meeting is dedicated to democratic values...'JAI' stands for victory (in Hindi)." The JAI meeting was a convergence of vision between the three nations.

All three leaders agreed on free, open, inclusive and rules-based order to maintain peace and prosperity in Indo-Pacific region. 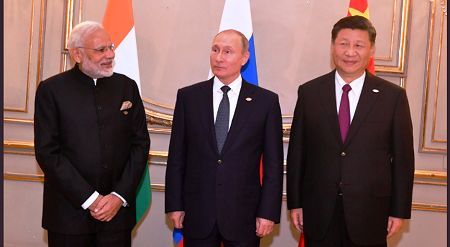 The three leaders exchanged views on expanding mutual cooperation in international forums, and to encourage greater interaction among the three countries. They agreed on the importance of reform and strengthening of multilateral institutions which have benefitted the world, including the United Nations, WTO, and well-established and new financial institutions.

The leaders of Brazil, Russia, India, China and South Africa met on November 30, 2018 for the annual Informal BRICS Leaders’ Meeting on the margins of the G20 Summit in Buenos Aires, Argentina.

The leaders advocated for a strong Global Financial Safety Net with an adequately resourced, quota-based International Monetary Fund (IMF) at its centre. They extended their support to Brazil which is going to host 11th BRICS Summit in 2019.