Hashim Amla: Hashim Amla is the only South African cricketer to score a triple century in a Test match.

Hashim Amla: Hashim Amla announced his retirement from all formats of international cricket on August 8, 2019. The South African cricketer has hit 55 centuries in 349 matches across all cricketing formats in his 15-year cricketing career. Amla said that he will continue to play domestic cricket.

Hashim Amla has made more than 18000 runs in his international career, which includes 55 centuries and 88 above fifty scores. Amla’s retirement announcement comes just a few days after another South African cricketer Dale Steyn announced his retirement from Test cricket.

While making his retirement announcement, Amla thanked all the fans for energising him when times were tough and celebrating with him during success.

Hashim Amla is the only South African cricketer to score a triple century in a Test match and holds the record of highest test score by a South African with 311 runs not out in a test match against England at the Oval in London in 2012.

Hashim Amla also holds the record of highest test runs by a South African against India, England and the West Indies. He also has the highest test score against Australia in the post-unity period.

Hashim Amla was also ranked among the best batsmen in ODIs for a long period with an average above 50 and a strike rate of 100. 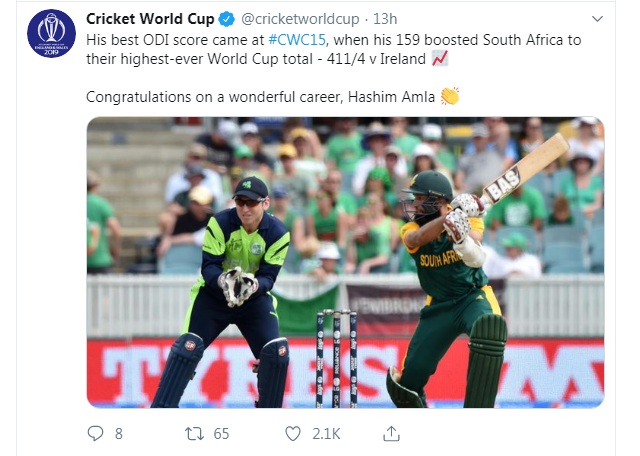 Amla and Faf du Plessis hold the record for the highest ODI partnership for any wicket by South Africa with 247 runs against Ireland at the 2015 Cricket World Cup in March 2015. Amla made his career-best ODI score of 159 runs in that match.

Amla along with AB de Villiers also holds the record of the highest fourth-wicket partnership for South Africa in a Test match with 308 runs against the West Indies.

In 2017, Amla and Quinton de Kock set the highest ODI partnership for any wicket for South Africa and the highest score (282) in an ODI without any loss of wickets in a match against Bangladesh.

Hashim Amla made 28 centuries and four double centuries in Tests and 27 centuries in ODIs. He is the fastest cricketer to complete 10, 15, 20 and 25 ODI centuries.

Hashim Amla is also the fourth cricketer in the world to have scored ODI centuries against all Test-playing nations.

Amla served as the captain of South Africa’s Test team from June 2014 to January 2016.

Amla announced his retirement from all forms of international cricket on August 8, 2019. He, however, said that he would be available for domestic cricket and the second edition of

He, however, said that he would remain available for domestic cricket as well as the second edition of South Africa’s Mzansi Super League Twenty20 competition, which will begin in November.