Prime Minister Narendra Modi has sought ideas from the people for his September 22 speech at Houston in the US. 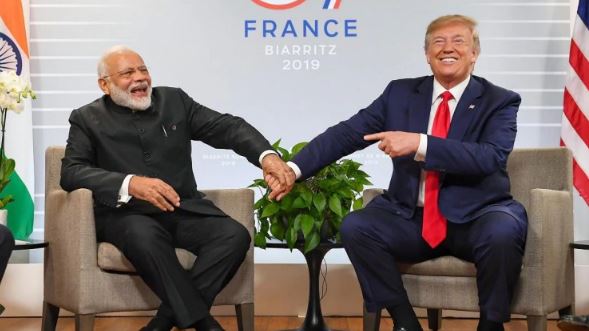 #HowdyModi Event: Prime Minister Narendra Modi has asked for the ideas from the people for his September 22 Howdy Modi event at Houston in the US. PM Modi sought for the ideas for his speech. PM Modi wrote on twitter, “There is great enthusiasm towards the #HowdyModi programme in Houston on 22nd. For my speech that day, I want to hear from you. Share your ideas for my address. I would refer to some of them during my remarks. Express your thoughts on the special Open Forum on the NaMo App.”

Earlier, PM Modi asked the people for their views for Independence Day speech and ‘Mann Ki Baat’ programme. Notably, over 50,000 Indo-American have already registered for ‘Howdy, Modi! Shared Dreams, Bright Futures’, event to be held at the NRG stadium in Houston. 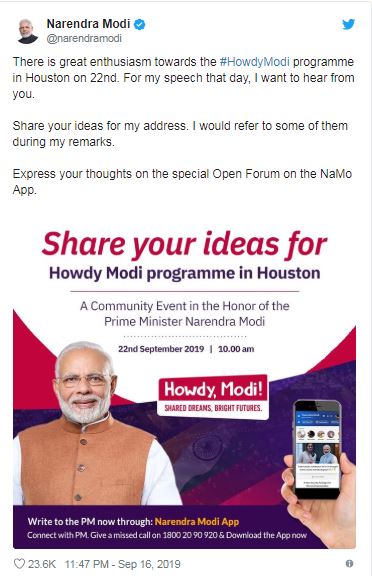 PM Modi and US President Trump will address 50,000 Indian-Americans at NRG Stadium, Texas. “Howdy Modi!” will be a big opportunity to emphasize the strong bonds between the people of the US and India. It will be the third meeting between Modi and Trump this year. Two previous meetings were held at G20 Summit in June in Japan and in France in July on the sidelines of the G7 Summit.

PM Modi on twitter confirms this development about US President Donald Trump to join him in this mega event. He said, “The special gesture of President @realDonaldTrump to join us in Houston highlights the strength of the relationship and recognition of the contribution of the Indian community to American society and economy.” 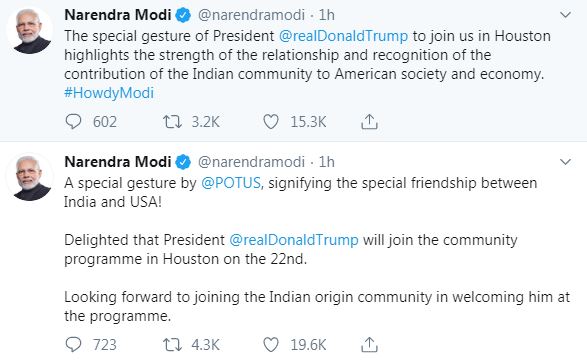 • The “Howdy Modi!” Shared Dreams, Bright Futures” is a community summit. It will be attended by representatives of 48 states, coming together to emphasize the shared values and aspirations of two great nations whose partnership is important to global peace, prosperity and human progress.
• This event brings together the President of the world’s most influential democracy, the Prime Minister of India and delegation of governors, members of Congress, mayors and other public officials.”
• A non-profit organization Texas India Forum is being organized the "Howdy, Modi!" event. This organization has been recently formed by hundreds of Indian American people in Texas and other parts of the US.

Previous US rallies by Modi

“Howdy Modi!” mega show will be the Narendra Modi’s third major address to the Indian-American community after he became the prime minister in 2014 and the first after his re-election in May. Modi addressed two previous rallies at Silicon Valley in 2016 and Madison Square (New York) in 2014. It was reported that both the events were attended by more than 20,000 people.

Donald Trump’s presence at the “Howdy Modi!” rally will also be a strong personal sign in favour of Narendra Modi because he faces concerns from a number of U.S. lawmakers over the situation in Jammu and Kashmir after the revoking of Article 370. Four senators wrote to US President Donald Trump on September 13 for attention to the communication ban in parts of the state. After that, seven other congress leaders also wrote another letter to US Ambassadors in Delhi and Islamabad. They asked both the countries to leverage their relationships with the respective governments to ensure tensions are de-escalated.