Howdy Modi Houston: Where, When & How to watch PM Modi's & Trump's address 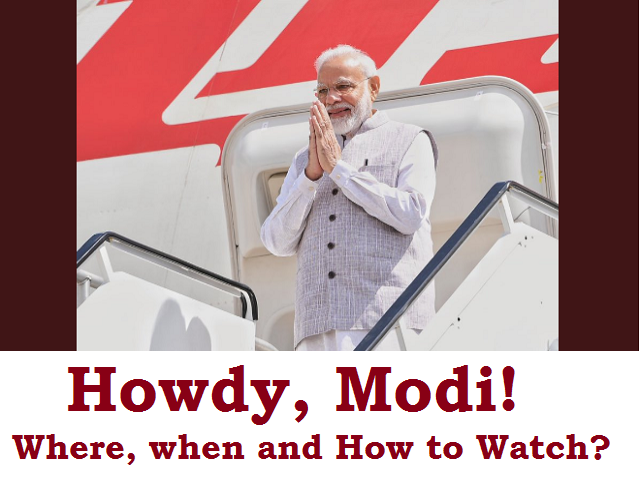 Howdy Modi Live Streaming begins soon: Indian-Americans gather outside the NRG Stadium, Houston to see Prime Minister Narendra Modi. PM Modi has already arrived in Houston on September 21, 2019 for his week-long tour in the United States. Of this week-long tour of PM Modi in the United States, the first leg of his tour will witness the grand event of 'Howdy, Modi! Shared Dreams, Bright Futures’, wherein the Prime Minister will be sharing the stage with the US President Donald Trump. The Howdy Modi event is being organised by the expat Indians of the United States in Houston, Texas. Get all Howdy Modi Live details here.

Ahead of the Howdy (How do you do) Modi event, the Prime Minister met the members of the Sikh community of America and CEOs of the leading companies. The meeting saw the signing of  Memorandum of understanding (MOU) between Tellurian and Petronet for 5 million tonnes of LNG (Liquefied Natural Gas) through medium of equity investment in Driftwood. President Trump will be joining PM Modi at the Houston event as a "special gesture" to acknowledge the growing ties between India and the United States. With this, Trump would become the first US President to attend an Indian-American Community event.

Howdy, Modi event will see the attendance of prominent Indian American personalities and US lawmakers. Over 400 artists are going to perform a cultural show at the event. So far, around 50,000 Indian-Americans have registered for the event. Prime Minister Modi will be interacting with the CEOs of leading American energy companies.

The Howdy Modi event will be telecasted live on Prime Minister Modi’s official YouTube channel and other channels. Various News television channels will also broadcast the event live to reach over billion people across the US and India.

What is weather forecast for Howdy Modi event at Houston?

The Howdy Modi weather prediction forecasts rain due to the tropical storm developing between the Gulf of Mexico and the Atlantic Ocean. There could be heavy rain in some parts of Texas and Louisiana.

When will the Howdy Modi event be held?

When will Howdy Modi event will start and conclude?

The Howdy Modi event will begin from 8:30 PM Indian Standard Time (IST) and will conclude at 11:30 PM IST. The event is of three-hour duration.

The Howdy, Modi event will be held at the NRG Stadium in Houston, United States. NRG Stadium is one of the largest professional football stadiums of the US.

What are the timings to attend the Howdy Modi event at Houston?

People who have registered for the Howdy, Modi event, need to enter the NRG Stadium by 5 PM IST. The event will begin from 8:30 PM and PM Modi and President Trump will arrive at 9:30 PM IST.

The Howdy, Modi live telecast can be viewed on Star Sports network.

The Howdy Modi event will be broadcast live online and on television channels to reach over 1 billion people across the US and India.

What all will take place during the Howdy Modi event?

The event will witness PM Narendra Modi's and President Trump's address to the Indian-American community. A Special cultural programme ‘Woven: The Indian-American Story’ will be held on ‘Shared Dreams, Bright Futures’, reflecting strong Indo-US cultural ties. This musical-dance show will be performed by over 400 artists.