Maldives, an island country, has been caught in a geopolitical struggle between China, India and the West. As soon as the results were declared, messages of congratulations from major countries including the United States and India among others began to pour in; however, China has not yet reacted to the outcome of the election.

Opposition candidate, Ibrahim Mohamed Solih, on September 24, 2018 won the Maldives Presidential Election 2018, defeating incumbent President Yameen Abdul Gayoom, who will stay on in the presidency until his term ends on November 17, 2018.

Ibrahim Mohammad Solih is a consensus candidate of the joint opposition, which includes the Maldivian Democratic Party, the Jumhooree Party, the Adhaalat Party and former president Maumoon Abdul Gayoom’s own faction of the Progressive Party.

As per the results announced by Maldives’ National Elections Commission, Solih fetched 58.3 percent of the votes or 134616 ballots, compared to 41.5 percent or 96142 votes secured by Abdul Gayoom of Progressive Party of Maldives.

Solih will be sworn in as President on November 17, 2018 and his term is expected to continue until 2023. Solih will be only the sixth President in the country’s five-decade old electoral history.

• In October 2008, a popular opposition movement instigated by a coalition of parties challenged the power of incumbent leader Maumoon Abdul Gayoom (half brother of Yameen Abdul Gayoom), forcing him to hold the Maldives' first multiparty presidential vote.

• In the country’s first free elections, Mohamed Nasheed, backed by a coalition of opposition parties, defeated Gayoom in a runoff and became the Maldives' first freely elected president in 2008. Two years later, the international watchdog Freedom House listed the country as an electoral democracy for the first time.

• However, in 2012, Nasheed was forced to resign from the office following a police mutiny and a political turmoil in the country better known for its exotic honeymoon resorts.

• It was Yameen Abdul Gayoom’s election as President in 2013 that ended the political turmoil. However, this trouble only intensified under Yameen.

• He had pulled Maldives out of the Commonwealth in 2016 and fostered closer ties with China and Saudi Arabia over traditional allies India and the United Kingdom.

Who is Ibrahim Mohamed Solih? 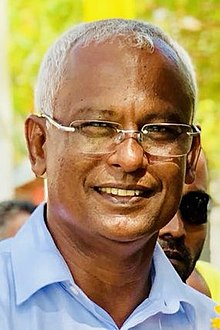 • Born in 1964 in Hinnavaru, Lhaviyani Atoll, Solih is a democracy activist well known for his reform efforts.

• Solih is one of the founding members of the Maldivian Democratic Party (MDP), a party started by journalist-turned-leader Nasheed who went on to become the President of the Maldives after winning the 2008 election.

• He became the leader of MDP’s Parliamentary Group in 2011, after the infamous coup that led to the removal of Nasheed.

• For most of his political career as a lawmaker since 1994, he has maintained a low-profile until he began campaigning in the run-up to Presidential elections recently.

• Representing Lhaviyani Atoll in the Maldivian Parliament, Solih became MDP’s presidential candidate after its other top figures were jailed or exiled by Yameen’s government.