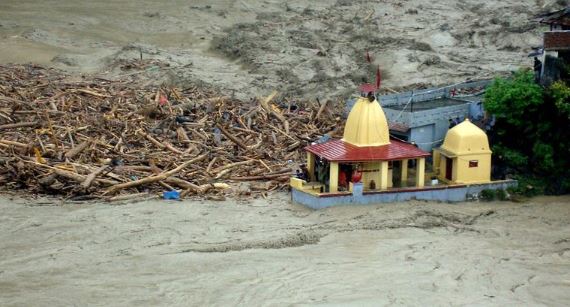 Internal Displacement Monitoring Centre (IDMC) has released a new global report on the displacement of people due to natural disasters. According to the IDMC report, about seven million people have been displaced globally due to natural calamities including floods and storms between January and June 2019.

IDMC Report also informed that more than 950 climate-related issues forced about seven million people to leave their homes. Most of the affected people are living in the Asian and African regions. In South Asia India accounted for most of the displacements.

• IDMC report informed that India accounted for most of the region’s new displacements. Its overall total of 2.8 million was among the highest in the world, of which nearly 2.7 million were triggered by disasters across 15 states.
• India was particularly hard-hit by the monsoon season when flooding devastated the south-western state of Kerala.
• Almost 1.5 million new displacements were recorded in Kerala in what was described as the worst floods in a century.
• Cyclone Titli struck Orissa and Andhra Pradesh states in October, triggering 400,000 new displacements and cyclone Gaja hit Tamil Nadu in November, triggering 2,49,000 displacements. 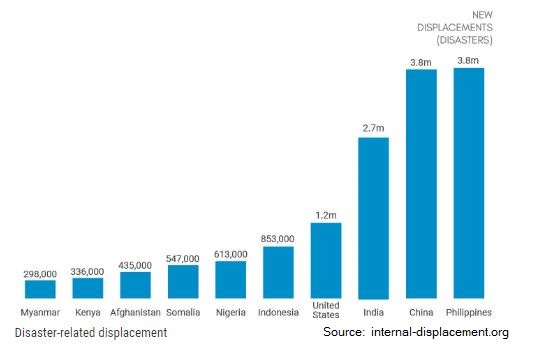 • IDMC report highlights that weather-related hazards, particularly storms, accounted for the majority of the new displacement associated with disasters, triggering 17.2 million displacements in 2018.
• In various regions of the world, unresolved conflicts and a rise in communal violence were responsible for most of the 10.8 million new displacements associated with conflict and violence in 2018.
• Despite the decline in conflict and displacement in Syria during 2018, the country’s civil war, in its eighth year, continued to trigger some of the largest population movements in the world. More than 1.6 million new displacements were recorded.
• Around 221,000 people were living in displacement nationwide as of the end of the year, suffering dire conditions and unable to return because of destroyed housing, ongoing insecurity and a lack of resources.

It is an authoritative source of data and analysis on internal displacement. The Internal Displacement Monitoring Centre (IDMC) was established in 1998 as the Norwegian Refugee Council (NRC). It works to inform policy and operational decisions that improve the lives of millions of people living in the internal displacement or at risk of becoming displaced in the future.