Pakistan has dropped 14 catches, just as many as India has caught in its four world cup matches. India has picked up the maximum number of catches (14) and dropped just one catch and it was dropped by KL Rahul off Yuzvendra Chahal’s ball during India vs Pakistan cricket match on June 16. Team India has received a lot of praise for its great performance in all three departments- batting, bowling and fielding. The men-in-blue have especially been praised for their remarkably quick fielding, alertness and swift movement on the field.

The final result of a cricket match is often largely dependent on the kind of fielding a team does. The teams that have sloppy and lazy fielding mostly end up on the losing side. This is clear from the world cup points table, as the teams that have lost the maximum number of matches have also dropped the maximum number of catches. The only exception to this is Afghanistan, which has lost all 7 of its world cup matches but dropped just 2 catches.  It is the second best catching side after India. The third-best catching side is Sri Lanka, which has let go just 3 catches.

Teams with Most Dropped Catches in World Cup 2019 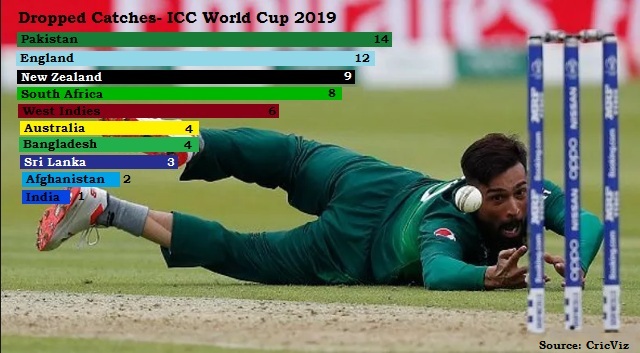 Pakistan is the worst catching side in the ongoing cricket world cup with most dropped catches-14, meaning they have dropped 35 percent of the catching opportunities provided to them, which perhaps has majorly cost them crucial matches.

The second worst catching side surprisingly is England, who dropped 12 catches before their match against Australia. England was considered as one of the title favourites at the beginning of the world cup tournament and now they are almost out of the running unless Sri Lanka loses all their remaining matches. Unexpectedly, one of the unbeaten teams in the world cup, New Zealand is ranked as the third worst catching side, as the Kiwis have let slip nine catches.

How is India the best catching side?

India has a point system where it grades the catches taken by the players. Following is the grading system:

Grade 1: Straightforward catch earns the fielder one point. By failing to pick this catch, the fielder loses two points.

Grade 2: A catch where the fielder is under pressure and is required to move earns him two points. By dropping this catch, the fielder loses one point.

Grade 3: A catch that is extremely difficult to take earns the fielder four points. No points are deducted on dropping grade 3 catch.