A delegation representing the Indian pharmaceutical industry will visit China on August 21-22, 2018 as China approved the import of generic Indian cancer-treatment drugs. 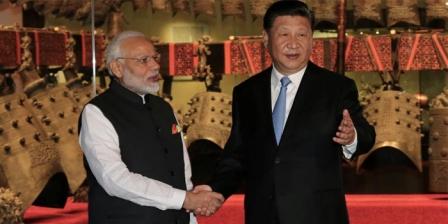 India and China on July 26, 2018 reiterated their commitment to maintain peace and tranquility along their border by enhancing communications between their militaries.

The agreement came during a meeting between Indian Prime Minister Narendra Modi and Chinese President Xi Jinping on the sidelines of the annual BRICS Summit in Johannesburg.

Both leaders agreed to give their militaries the necessary directions to enhance communications between them and to maintain peace and tranquility in the border areas.

Other decisions taken during the meeting

• A delegation representing the Indian pharmaceutical industry will visit China on August 21-22, 2018 as China approved the import of generic Indian cancer-treatment drugs.

• A number of Indian mills in the non-Basmati rice sector have been cleared by a Chinese delegation on the grounds of phyosanitary and quarantine requirement.

Both the leaders are expected to meet again on the margins of the G20 Summit in Argentina at the end of 2018.

Earlier on April 28, 2018, Prime Minister Narendra Modi and Chinese President Xi Jinping highlighted the importance of maintaining peace along the India-China border during the first-ever two-day informal summit between both the sides.

Keeping the Doklam Standoff in mind, both the leaders also decided to issue guidance to their militaries to implement various confidence-building measures to strengthen the existing institutional mechanisms, thus, preventing and managing the situations in the border areas.

Both the leaders stressed the importance of maintaining peace and harmony in all areas of the India-China border region for the overall development of bilateral relations.

The dispute at Doklam began in June 2017 after the Indian Army stalled the construction of Chinese road in Doklam, the area that lies in the tri-junction of India, China and Bhutan. Doklam Plateau is a disputed territory for China and Bhutan.

India said that the road in Doklam is a threat to India as the region is close to Siliguri corridor, also known as Chicken’s Neck, which links India to its northeastern states. China’s road building activity was also protested by Bhutan.