India largest emitter of SO2 in world: Greenpeace

India is the largest emitter of anthropogenic sulphur dioxide in the world, as per data released by Greenpeace.

The analysis of NASA data released by Greenpeace reveals that India has over 15 percent of all anthropogenic sulphur dioxide (SO2) hotspots in the world. The SO2 hotspots were detected by the OMI (Ozone Monitoring Instrument) satellite.

SO2 Hotspots in India

The main SO2 hotspots in India include Singrauli in Madhya Pradesh, Korba in Chhattisgarh, Talcher and Jharsuguda in Odisha, Neyveli and Chennai in Tamil Nadu, Kutch in Gujarat, Ramagundam in Telangana and Chandrapur and Koradi in Maharashtra. As per the data, the majority of the plants in India lack flue-gas desulfurization technology to reduce air pollution.

SO2 Hotspots in the World

The NASA data revealed that Norilsk smelter complex in Russia is the largest SO2 emission hotspot in the world, followed by Kriel in Mpumalanga province in South Africa and Zagroz in Iran.

However, in the country-wise ranking, India topped the list in emitting SO2 as it has the maximum number of hotspots. 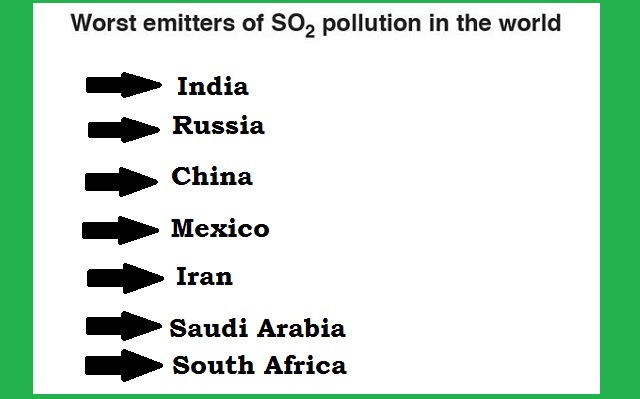 SO2 emission is a significant contributor to air pollution and the largest source of SO2 in the atmosphere is  burning of fossil fuels in power plants and other industrial facilities.

Air pollution has become a huge public health concern with 91 percent of the world's population living in areas where air pollution exceeds the guideline limit set by the World Health Organization (WHO). As a result of air pollution, around 4.2 million people are dying prematurely every year.

How to control the SO2 emission?

According to environment experts, India should take stricter action against coal power plants and should not give them a free to hand to continue polluting the atmosphere and cause a public health emergency.

The Environment Ministry had introduced SO2 emission limits for coal power plants in December 2015 and set the initial deadline to control SO2 emissions from power generation by December 2017.

The deadline was later extended till December 2019 after a request from the Ministry of Power and power plant operators in Delhi-NCR and till 2022 for some other power plants across the country through a Supreme Court order.