India and Saudi Arabia have signed an agreement to set up a highest-level Strategic Partnership Council.

PM Narendra Modi paid an official state visit to the Kingdom of Saudi Arabia on October 29, 2019 at the invitation of King Salman bin Abdulaziz Al Saud. During the visit, both the leaders reviewed the historical relations between India and Saudi Arabia and exchanged views on the regional and international issues of mutual interest.

The two leaders, further, re-affirmed their commitment to strengthen the strategic partnership between the two nations, which was envisaged in the ‘Riyadh Declaration’ that was signed in March 2010. PM Narendra Modi also held bilateral discussions with Crown Prince and Deputy Prime Minister of Saudi Arabia, Mohammed bin Salman bin Abdulaziz Al Saud.

Also read: Armenian Genocide: All you need to know

Following the talks, 12 Memorandums of Understanding (MoUs) were signed between the two nations. The most significant agreement was signed to establish a Strategic Partnership Council to further strengthen the relations between India and Saudi Arabia and the founding document for the same was signed by the Crown Prince and PM Narendra Modi.

The Strategic Partnership Council will be headed by PM Narendra Modi and King Salman of Saudi Arabia. The council has been established to enable smooth coordination between the two nations on significant issues.

The setting up of the strategic council is significant, as Saudi Arabia is only the fourth nation with whom India shares such an inter-governmental mechanism, which is headed by the Prime Minister. Before Saudi Arabia, India only shares such high-level mechanism with Russia, Germany and Japan. 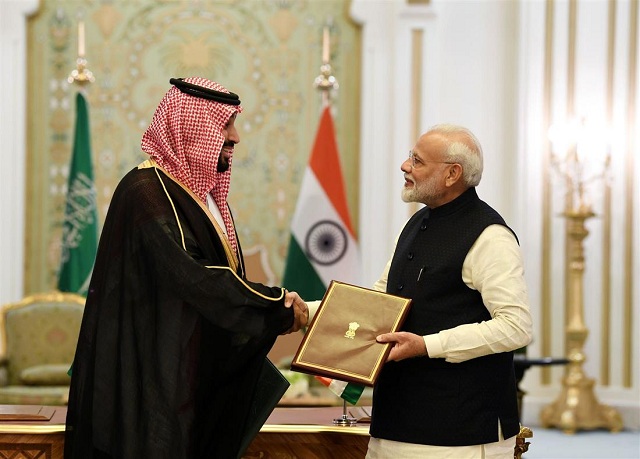 The Indian PM and Saudi Arabian Crown Prince discussed various regional and global issues of mutual interest and reiterated their rejection of all forms of interference in the internal affairs of the nations. They also stressed on the need for the international community to play its part towards preventing attacks against the sovereignty of States.

In relation to the Syrian situation, the leaders highlighted the importance of preserving unity in Yemen, ensuring its stability and coming out with a political solution to solve the Yemeni crisis, based on the outcome of the  Yemeni National Dialogue, GCC initiative and the Security Council Resolution (2216).

India and Saudi Arabia both stressed on the need for achieving a comprehensive, just and lasting peace in Palestine based on relevant UN resolutions and the Arab Peace Initiative. The leaders expressed hope that the peace resolution will guarantee the rights of the people of Palestinian and lead to the establishment of their independent state based on the 1967 borders with Jerusalem as its capital.

The two leaders agreed on the importance of bilateral engagement in promoting ways to secure the waterways in both the Indian Ocean region and the Gulf, from any threat that may endanger the interests of the two countries including their national security.

Stressing that terrorism and extremism threaten all nations and societies, the two sides rejected any attempt to link it to any particular religion, race or culture. They also rejected all acts of terrorism and highlighted the importance of preventing access to weapons such as drones and missiles to commit terrorist acts against other nations.

The leaders urged business communities in the two nations to utilize the investment potential in both the nations, especially in sectors such as mining, infrastructure, agriculture, skilled human resources and energy including renewable energy.

At the end of the visit, PM Modi extended an invitation to King Salman to visit India to complete the consultations and further discuss matters of bilateral cooperation and regional and international issues of mutual interest. King Salman, the Custodian of the Two Holy Mosques, welcomed the invitation. The Indian PM also expressed support to Saudi Arabia for its upcoming presidency of the G20 in 2020.