India has signed a Memorandum of Cooperation (MoU) with Japan on Technical Intern Training Programme (TITP).The MoC was signed by Dharmendra Pradhan, Union Minister for Petroleum & Natural Gas and Skill Development and Entrepreneurship and Katsunobu Kato, Japanese Minister of Health, Labour and Welfare of Japan. 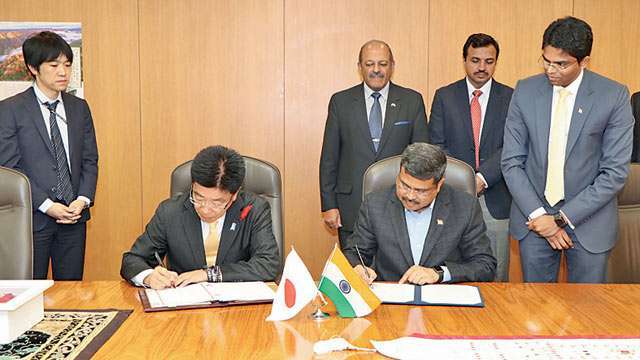 The pact was signed during the visit of the Union Minister Skill Development Minister to Tokyo.

• Under the programme, India will send 3-lakh youth to Japan as technical interns for on-the-job training for a period of 3-5 years.

• The MoC is expected to boost bilateral cooperation between India and Japan in the field of skill development.

• India is the third country with which Japan has signed the MoC as per the requirements of the Technical Intern Training Act scheduled to enter into force in November 2017.

• According to Japan’s official data for 2016, approximately 2.3 lakh technical intern trainees from multiple countries are on training in the island nation.

• In 2016, about 1, 08,709 technical interns entered Japan from various partner countries such as Vietnam, China and Indonesia that account for large numbers.

The MoC is an extension of the bilateral joint statement issued during the visit of Japanese Prime Minister Shinzo Abe to India in September 2017, in which both Prime Ministers expressed confidence that synergy between Japan’s advanced technology and India’s rich human resources can transform both countries into new centres of production in the global industrial network.

The programme is an ideal platform through which complementary strengths of India and Japan could be leveraged for mutual benefit.

The technical interns trained in Japan under the TITP would be an asset for PM Modi’s Skill India initiative upon their return to India.

The Skill India campaign was launched by Prime Minister Narendra Modi on 15 July 2015 with the aim of training over 40 Cr people in India in different skills by 2022.