PM Modi visited Kampala, Ugandan capital on the second leg of his three-African nations’ tour after concluding his Rwanda visit. On the last leg of his five-day visit to Africa, Modi will attend 10th BRICS Summit at Johannesburg in South Africa. 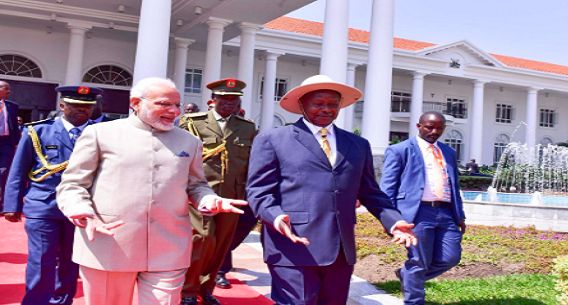 The agreements were signed following the delegation-level talks between Prime Minister Narendra Modi and Ugandan President Yoweri Museveni in Kampala.

Here are the MoUs signed between India and Uganda:

Other initiatives announced by PM Modi for Uganda

• India will continue to play a stable partner in the country's journey towards development.

• PM Modi also offered to build a commemoration centre in Kampala in memory of Mahatma Gandhi.

• Both the countries would work together in trade, investment and tourism sectors, supporting mutual prosperity through reciprocity.

• Training, capacity building and infrastructure creation are core areas of cooperation between India and Uganda.

Moreover, PM Modi also announced to open a High Commission in Rwanda which will not only establish communication between the governments of the two countries but also enable facilities for consular, passport and visa. India will also donate 200 cows for Rwanda’s pet social protection scheme, Girinka.