The two nations appreciated their strong, robust and growing bilateral ties across the entire spectrum of trade and commerce. 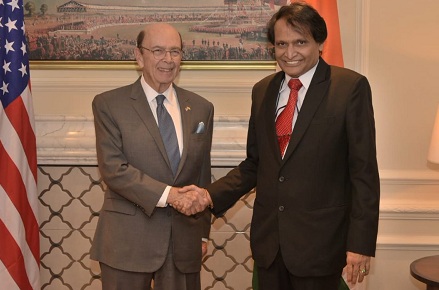 India and the United States have agreed to strengthen economic co-operation and bilateral trade by ensuring greater collaboration amongst stakeholders, including government, businesses and entrepreneurs.

This was agreed upon during a bilateral trade meeting that was held between the two countries in New Delhi on May 6, 2019. The meeting was co-chaired by Union Commerce and Industry Minister Suresh Prabhu and US Secretary of Commerce Wilbur Ross.

• During the talks, the two leaders appreciated the strong, robust and growing bilateral ties between their countries across the entire spectrum of trade and commerce.

• They also expressed satisfaction over last year's progress, with bilateral trade in Goods and Services registering a growth of 12.6 per cent. They also discussed various outstanding trade issues.

• The Indian Government recently extended its deadline to impose retaliatory import duties on 29 US products, including almond, walnut and pulses, till May 16.

• The deadline has been extended several times since June 2018, when India decided to impose these duties in retaliation to a move by the US to impose high customs duties on certain steel and aluminium products.

• The extension comes in the backdrop of the US decision to withdraw export incentives being provided to them to Indian exporters under Generalised System of Preferences (GSP) programme, which is expected to impact India's exports to the US worth USD 5.6 billion under this scheme.

Further, both the nations have made a commitment to facilitate actions necessary for increasing the bilateral trade to $500 billion.

Soumeylou Boubeye Maiga and his entire cabinet resigned on April 18 following the massacre of around 160 members of the Fulani herding community on March 23 in the village of Ogossagou near Mali's border with Burkina Faso.

• Mali President announced the new executive comprising 37 members under Prime Minister Boubou Cisse, who was appointed on April 22 to oversee the formation of a "broad-based" government.

• Cisse had signed a pact last week with the opposition and majority party representatives in Bamako, declaring their willingness to set up a politically-inclusive new government.

• The new Mali government includes ten women, more than a quarter of the total but fewer than the previous team, which included about a third.

• The key portfolio of defence went to General Ibrahim Dahirou Dembele, former army chief of staff under the junta that emerged from a 2012 coup.

• The role of justice minister went to Malick Coulibaly, president of Mali's National Commission for Human Rights (CNDH), who has held the post before.

• The position of health minister went to UNAIDS Chief Michel Sidibe, whose tenure at the agency was marred by allegations of serious mismanagement. It is not immediately clear whether Sidibe will leave his UN post but he has been scheduled to step down in June following widespread concerns over his conduct in office, including the handling of sexual assault allegations against one of his top deputies.

Thousands of people took to the streets on April 5 to protest against an upsurge of violence in the nation that has claimed around 600 lives, which demonstrators said the government had failed to stop.

Since the appearance of a jihadist group under preacher Amadou Koufa in central Mali in 2015, recruiting mainly among the Dogon, a hunting and farming community, clashes between the Dogon and the nomadic Fulani have intensified.

Last week, the UN's MINUSMA mission stated that the Ogossagou massacre had been planned, organised and coordinated and could constitute a crime against humanity.