Yuzvendra Chahal has become the third Indian bowler to reach the milestone of 50 T20I wickets. 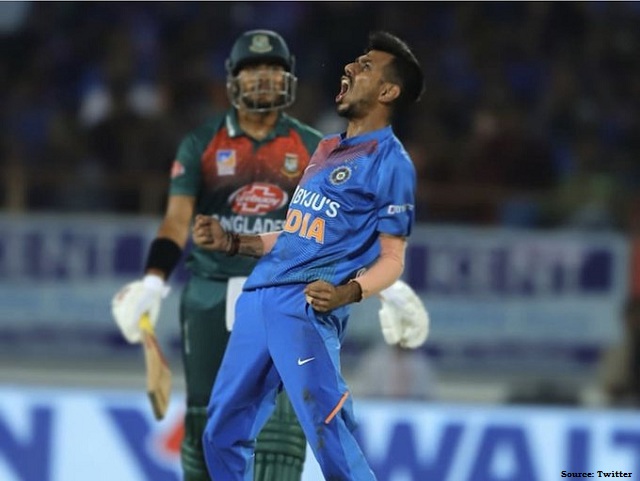 Yuzvendra Chahal has created history by becoming the fastest Indian bowler to take 50 T20I wickets. He crossed the milestone during the 3rd T20I between India and Bangladesh at the VCA Stadium in Nagpur.

Chahal also became the third Indian bowler to reach the milestone of 50 T20I wickets. Only Jasprit Bumrah and R Ashwin have crossed the milestone before him. However, Chahal was the fastest to achieve the feat, as he reached it in his 34th innings, while Bumrah took 42 innings and Ashwin took 46 innings.

Chahal created the record by taking Mahmudullah’s wicket in the 17th over of India’s third and final T20I against Bangladesh. India put up a score of 174/5 in 20 overs. Indian bowlers were struggling initially, but Deepak Chahar and Shivam Dube’s incredible bowling bundled up Bangladesh for 144 runs in 19.2 overs.

Though Chahal was expensive through the game, he took the crucial wicket of Bangladesh’s captain Mahmudullah and ended the team’s last hope in the game. The leg-spinner ended the match with a figure of 43/1.

Overall, Chahal was impressive throughout the series. He had single-handedly put pressure on the Bangladesh batsmen in the first T20I between India and Bangladesh in New Delhi. He was India’s best bowler in the 2nd T20I as well, which was played in Rajkot.