Justice NV Ramana, part of three-member in-house inquiry panel set up to examine the allegations of sexual harassment against the CJI recused himself from it on April 25. 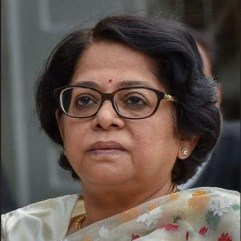 Indu Malhotra part of panel to probe case against CJI

Justice Indu Malhotra was on April 25, 2019 appointed as the third member of the in-house inquiry panel set up to examine allegations of sexual harassment against Chief Justice of India Ranjan Gogoi.

Malhotra was appointed to the panel following the recusal of Justice N V Ramana. Senior-most judge S A Bobde, who is heading the panel, appointed Justice Malhotra to the committee. Another woman judge, Justice Indira Banerjee is also a part of the panel.

The complainant had asked the panel to allow her to appear before it along with a lawyer and the proceedings of the committee be video recorded so that there can be no dispute about what transpired in the inquiry.

To this, Justice Bobde, the senior-most apex court judge, stated that this is going to be an in-house procedure which does not contemplate representation of advocate on behalf of parties. He added that it is not a formal judicial proceeding.

The Supreme Court had on April 23, 2019 constituted a three-judge panel headed by Justice SA Bobde, the senior-most judge in the apex court after the Chief Justice of India (CJI), to inquire into the sexual harassment complaint by a former junior court assistant against CJI Ranjan Gogoi. Justice Bobde had inducted Justices Ramana and Banerjee into it.

Following its constitution, the inquiry committee issued notices to the complainant and SC secretary general Sanjeev Kalgaonkar and asked them to be present during the first hearing of the complaint, which is scheduled for April 26.

The panel would be conducting an in-camera proceeding. It is expected to hear the complainant in person and analyze the evidence put forward by her.

This is the first in-house inquiry on a sexual harassment complaint conducted in the Supreme Court and it is the first-ever time ever such an inquiry is being conducted against the CJI.

The Supreme Court on April 25, 2019 constituted a one-man panel comprising former SC judge, Justice A K Patnaik to hold an inquiry into the allegations of a larger conspiracy to frame Chief Justice of India Ranjan Gogoi and fixing of benches in the top court.

The apex court asked the Directors of CBI and IB and Delhi Police Commissioner to cooperate with Retired Justice Patnaik during the inquiry.

• The top court ordered that the affidavit filed by advocate Bains be transferred to Justice (Retd) Patnaik in a sealed cover.

• The top court clarified that the inquiry will not deal with the allegations of sexual harassment against the CJI.

• The court said the outcome of the inquiry will not affect the in-house committee which is dealing with the complaint against the CJI.

• Upon completion of the inquiry, Justice Patnaik would be required to file a report in a sealed cover before the court after which the matter will be heard again.

• The court has left it to the panel to take the assistance of the people required for the inquiry.

The order to form the one-man panel was delivered by a special bench headed by Justice Arun Mishra, which also comprised Justices R F Nariman and Deepak Gupta.

The bench had on April 23, 2019 sought a response from a lawyer, Utsav Singh Bains, who claimed that there was a conspiracy to make CJI Gogoi resign by framing him. The bench had issued a notice to Bains directing him to appear on April 24 with proof.

After considering the factual gamut and the affidavits filed by advocate Utsav Singh Bains, the bench stated they are appointing Justice A K Patnaik, retired judge of this court, to hold an inquiry into the allegations levelled in the affidavit filed by Bains.