ISSF World Cup 2019: Manu Bhaker has broken a junior world record with her total score of 244.7.

Manu Bhaker also broke the junior world record with her total score of 244.7. She also became the only second Indian to win gold in the 10m Air Pistol at the ISS World Cup, after Heena Sidhu.

Another Indian Yashaswini Deswal, who was also competing in the finals of women’s 10m Air Pistol event, finished sixth in the final round.

• Manu Bhaker with her overall total of 244.7 bagged gold in women’s 10m air pistol event at the season-ending tournament of the International Shooting Sport Federation. 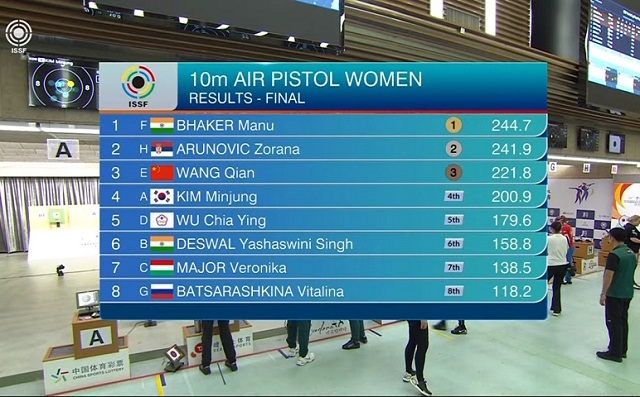 • While Serbia's Zorana Arunovic won silver in the event with a score of 241.9, China’s Quian Wang won the bronze medal with a total of 221.8.

• In the men’s 10m air pistol event, India’s Abhishek Verma and Saurabh Chaudhary have qualified for the final. While Abhishek Verma topped the qualifications with 588 pts, Chaudhary was 7th with 581 pts.

• Manu Bhaker, however, along with Rahi Sarnobat, failed to qualify in the women’s 25m air pistol event. While Bhaker finished 10th in the qualifications with 583 pts, Sarnobat finishes 18th with 569 pts.

Heena Sidhu had created history by becoming the first Indian pistol shooter to win gold at the ISSF World Cup finals in 2013.

Manu Bhaker, with the win, has also confirmed her berth at the 2020 Tokyo Olympics.