Jaipal Reddy: Jaipal Reddy, former Union Minister passed away at the age of 77 in Hyderabad on July 28, 2019. The veteran Congress leader was being treated for high fever in the ICU at Asian Institute of Gastroenterology in Hyderabad. S Jaipal Reddy was a five-time Member of Parliament (MP) and four-time Member of Legislative Assembly (MLA). He was also a two-time Rajya Sabha MP and was a union minister under three governments. Reddy has left behind his wife, two sons and a daughter.

Sonia Gandhi, UPA Chairperson expressed her grief over the passing of the senior Congress leader saying, "I am deeply saddened at the passing away of S Jaipal Reddy. A senior, erudite and humane leader, he was a valued colleague who enriched the Parliament and the government.” Gandhi added saying, “respected across political parties and adored by the media for his accessibility and forthright responses, Jaipal Reddy always held the interests of people close to his heart.”

Vice President Venkaiah Naidu said, “Jaipal Reddy was a towering intellectual & an excellent speaker in both English & Telugu. In fact, both of us were batchmates in AP Assembly & used to sit next to each other & always speak one after another.” He added saying that with his razor-sharp intellect and biting wit, he was also a powerful spokesperson of the party to which he belonged. 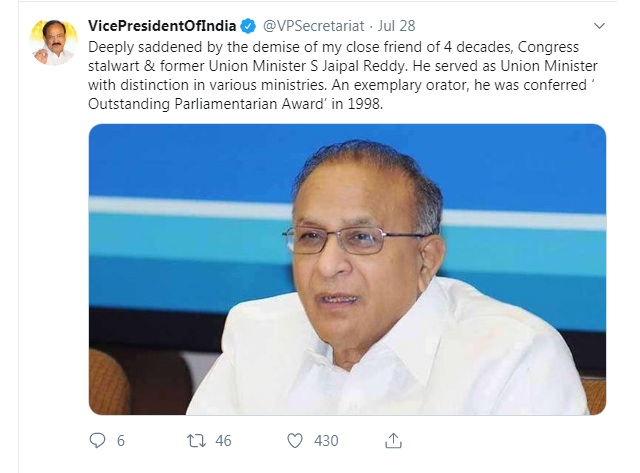 Jaipal Reddy won four consecutive terms as an MLA of undivided Andhra Pradesh from 1969 till 1984 and served at key positions under various government departments.

Jaipal Reddy had quit the Congress Party and the Andhra Pradesh Assembly in 1977 to protest against the emergency imposed by the then Prime Minister Indira Gandhi and joined the Janata Dal (JD). Reddy returned to the Congress after 20 years in 1999.

Jaipal Reddy joined the Janata Party in 1977 and took on Indira Gandhi from Medak as Janata Party’s candidate in 1980. After the Janata Party coalition disintegrated, Reddy joined Janata Dal in 1979. He took a full circle and returned to Congress in 1999, 20 years later, and turned into a vocal critic of the Atal Bihari Vajpayee led NDA-government in Parliament.

Reddy, during his time with the opposition parties, was the key Opposition voice against Congress, especially in 1984 when the Rajiv Gandhi-led Congress swept through the Lok Sabha after a sympathy wave following Indira Gandhi’s assassination.

Jaipal Reddy played an instrumental role in UPA government’s historic decision of dividing Andhra Pradesh and creating Telangana in 2014. He did not contest elections after the formation of Telangana.

Jaipal Reddy was known to be one of the most strong-headed, conviction-driven and clean political leaders. His oratory skills in Parliament won him the Best Parliamentarian Award in 1998. He was the first Parliamentarian from South India to win the honour.

Jaipal Reddy served as the Union Minister for Urban Development and Union minister for Petroleum and Natural Gas under Manmohan Singh’s second term in 2009.