Modi-Trump address at Howdy Modi event: "The time has come to take a tough stand against terrorism and the US President Donald Trump is firmly with India in its fight against terrorism," said PM Modi. 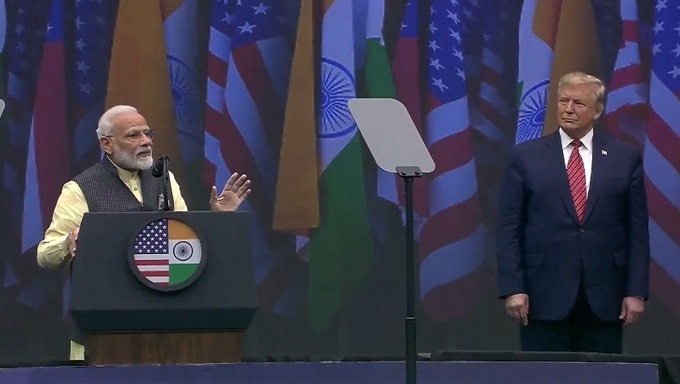 Modi-Trump address at Howdy Modi event:  Prime Minister Narendra Modi began his speech at the historic 'Howdy Modi' event by hailing Donald Trump's leadership and his great vision for America. Modi stated that Trump has left a deep impact everywhere and "today, he is with us." Modi added by saying that this is an extraordinary and unprecedented moment.

Speaking on his meeting with Trump, "millions of people across time zones are witnessing history in the making," said Modi. He further stated President Trump has made America great again and rallied for Trump 2.0 with a revised version of his popular slogan, "Ab ki Baar Trump Sarkaar."

Modi continued by saying that Trump has already made the American economy strong again and he has achieved much for the US and for the world. I present to you my friend, a great Indian friend, American President Donald Trump," said Modi while inviting President Trump to take the stage to address the gathering.

If we are re-elected, India will have a true and good friend in the white house. "The relationship between India and US are stronger than never before. India never had a better friend in the White House than me," says Trump. He further stated, "our national constitutions begin with the same words- We the people, which means that India and America both honour and fight for the citizens.

Trump continued by saying that under PM Modi's leadership, we see a strong sovereign and the thriving republic of India. "With PM Modi's pro-growth policies, India has lifted nearly 300 million out of poverty. India and United States both will see something like they have never before.," said Trump. Trump also pointed out how India has never invested in the United States like this before and this is reciprocal because they are doing the same in India.

1. India never had a better friend in the White House than me.

2. Under PM Modi's leadership, the world has witnessed a strong, thriving and sovereign India.

3. The relationship today between India and the US is stronger than ever before.

4. NBA coming to India- Indians will get to watch their first-ever home NBA basketball match in Mumbai next month.

5. Border security: Border security is vital to both the United States as well as India. "We are committed to protect innocent civilians from the threat of radical Islamic terrorism," said Trump.

7. India and the United States will work together to make our nations stronger and prosperous. Trump also mentioned space cooperation between the two countries.

8. Tiger Triumph-India and the US will demonstrate the progress of their defence relationship by holding their first-ever tri-service military exercise, called 'Tiger Triumph'.

In November the US & India will demonstrate dramatic progress of our defence relationship, holding the first-ever tri-service military exercise between our nations, it is called 'Tiger Triumph', good name.

Following his speech, Trump welcomed Indian Prime Minister Narendra Modi back on the stage.  The Indian Prime Minister began by saying that there is a new history and chemistry under making here, referring to the ties between the United States and India. "Unity in Diversity, this is the specialty of India and the strength of our vibrant democracy," said PM Modi. Speaking on the name of the event, "Howdy, Modi", Modi said that is no one, just a common man working on the directions of 130 crore Indians.

1.  Unity in Diversity- India's languages form a significant part of the nation's liberal and democratic society.

2. Changing mindsets- India is challenging to change the mindset of people who believe that nothing can change. " We are aiming high and we are achieving higher," said Modi.

3. Data is the new gold- Data is available at the cheapest rate in India.

4. GST- Our government has bid farewell to tax problems by implementing one nation, one tax system.

5. Corruption- India has bid farewell to more than 350000 fake companies in the past five years. India has also removed fake names and stopped crores worth money from going into the wrong hands.

6. Article 370-  India has bid farewell to Article 350, which had deprived the people of Jammu and Kashmir from growth and development. The move of revoking the Article will enable the people of J&K to enjoy the same benefits, as given to the rest of India. This will end the exploitation of women and Dalits in the state.

8. Pakistan- Some have a problem with withdrawal of article 370. These are the same people who shield and nurture terrorism. "Be it the 9/11 in the United States or 26/11 in Mumbai, where are the conspirators found?," PM Modi asked. He further stated that the time has come to take a tough stand against terrorism and he confirmed that the US President is firmly with India in its fight against terrorism.

PM Modi ended his historic speech by inviting US President Donald Trump, his family along with other Americans to visit India. He stated that their friendship will take their shared dreams and vibrant future to a new height.

'Howdy Modi event': Why is it important?

Prime Minister Narendra Modi played host to US President Donald Trump at Houston's NRG Stadium for an event that saw around 50,000 Indian-Americans in attendance. No US President has ever addressed a community event along with an Indian Prime Minister before this. The event highlighted the sharp shift in Indian diplomacy and the new levels of India-US bilateral relations. The event showcased the heightened friendship and warmth between the leader of one of the most powerful nations in the world and India. PM Modi and Trump went way out of the way to show their unparalleled camaraderie. The event also showed how the US is interested in exploring new avenues of cooperation with India. The event also sent out a very strong message -that the US-led by Donald Trump is standing firmly with India in its fight against terrorism.