The World Bank has released the Doing Business (DB) Report 2018. India was ranked 100 among the 190 countries assessed, a jump of 30 places, as it was ranked 130 in the previous year’s business report. 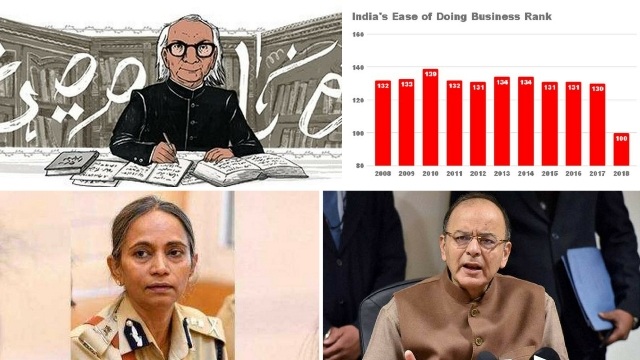 The Union Government has constituted a ministerial panel headed by Finance Minister Arun Jaitley, which will oversee merger proposals of state-owned banks.

The panel will also comprise Railway and Coal Minister Piyush Goyal and Defence Minister Nirmala Sitharaman as members. The move to create large banks aims at meeting the credit needs of the growing Indian economy and building capacity in the PSB space to raise resources without dependence on the state exchequer.

She takes over following the retirement of R K Dutta on superannuation. She was previously serving as the Director General of Police - Internal Security.

Born in Desna village, in the Nalanda district of Bihar on 1 November 1930, Desnavi has written over 50 books on Urdu literature. Some of his major works include Hayat-e-Abul Kalam Azad, a book on freedom fighter Maulana Abul Kalam Azad; Sat Tahriren, Motala-E-Khotoot Ghalib and Talash-E-Azad.

Throughout his career span, Desnavi played a prominent role in the evolution of Urdu literature and academic thought in India.

The DB Report is an assessment of 190 economies and covers 10 indicators which span the lifecycle of a business. India has improved its rank in 6 out of 10 indicators and has moved closer to international best practices (Distance to Frontier score).