MS Dhoni retirement: MS Dhoni's retirement speculation has begun going viral after a cryptic tweet by Virat Kohli. Indian skipper Virat Kohli tweeted a picture earlier of him and former skipper MS Dhoni earlier today from India's 2016 T20 World Cup match with a caption that read, "A game I can never forget. Special night. This man, made me run like in a fitness test, @msdhoni." 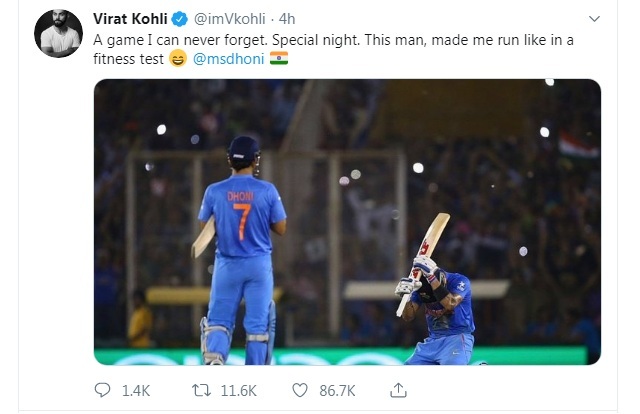 The ICC World Cup 2019 was MS Dhoni's fourth World Cup and since the start of the tournament, rumours of MS Dhoni's retirement were doing rounds and the speculations intensified after India's semi-final exit from World Cup 2019. Dhoni himself has given no such indication. In fact, when he was asked about it, Dhoni said, “I don't know when I will retire.”

In July, MS Dhoni's childhood coach Keshav Banerjee claimed that when he went to the former skipper's house, Dhoni's parents said that they don't want him to play for the national cricket team anymore. The news came ahead of India's West Indies tour, which Dhoni skipped to fulfil his duty as Lieutenant Colonel in Indian Territorial Army's Parachute Regiment.

So is MS Dhoni going to retire? Can India afford to lose a player like Dhoni at this stage?

This is a question that raises multiple other issues like the problem of quality middle order in the Indian team. The former Indian skipper, MS Dhoni has been an integral part of the Indian cricket team, adding value in every single aspect of the team, both on and off the field. MS Dhoni's last match against New Zealand in the ICC World Cup semi-final was his 350th ODI for India. With the milestone, Dhoni has entered the elite list of batsmen who have played more have 350 ODIs. The list includes legendary cricketers such as Sachin Tendulkar, Mahela Jayawardene, Sanath Jayasuriya, Kumar Sangakkara, Ricky Ponting,  Shahid Afridi, Inzamam-ul-Haq and Wasim Akram.

MS Dhoni had come under a lot of criticism for his batting approach and inability to make big hits during the ICC World Cup 2019. Dhoni faced great difficulty in converting ones and twos into boundaries. However, the former skipper's reliability is an aspect that cannot be questioned. MS Dhoni has always held on to his wicket when his team needed it the most.

MS Dhoni as a wicket-keeper

Another key factor is MS Dhoni as a wicket-keeper. MS Dhoni is one of the world’s best wicket-takers. His ability behind the stumps is uncanny as he is known for his lightning quick reflexes and rarely does he miss a stumping chance or a catch.  MS Dhoni and Ravindra Jadeja also set a new record for India by entering the records list of most successful bowler-wicketkeeper pair in ODIs. The combination of Dhoni and Jadeja have together dismissed 29 batsmen in ODI cricket, overtaking the pair of Nayan Mongia and Venkatesh Prasad who have effected 28 dismissals.

It was under MS Dhoni’s captaincy that India became the top test side, won the 2007 T20 World and finally the historic ODI Cricket World Cup in 2011. Current India captain, Virat Kohli has always had praise for the former skipper and he has often been seen asking for Dhoni's inputs in key decisions. MS Dhoni had announced his retirement from Test cricket on December 30, 2014.

MS Dhoni holds the record of most wins by an Indian captain in Tests, ODIs and T20Is and also that of most back-to-back wins by an Indian captain in ODIs. Dhoni was the first captain of the Indian cricket team, under whom Team India won all three ICC-limited overs trophies including 2007 T20 World Cup, Champions Trophy and ICC World Cup 2011. Under Dhoni’s captaincy, India also became number one test side. Dhoni is also the only wicket-keeper to effect 150 stumping dismissals in Test, ODI and T20I combined.