The scientists used 14 years of data from the NASA’s twin Gravity Recovery and Climate Experiment (GRACE) satellites to track global trends in freshwater in 34 regions around the world. 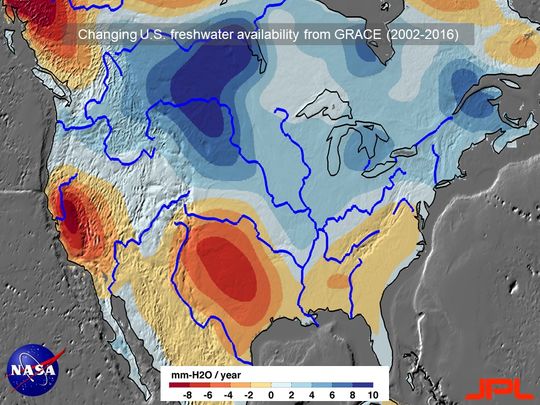 In a first, scientists have discovered that the Earth’s wet land areas are getting wetter and dry areas are getting drier due to various factors, including human water management, climate change and natural cycles.

• Freshwater is found in lakes, rivers, soil, snow, groundwater and ice. On land, freshwater is one of the most essential Earth's resources for drinking water and agriculture.

• The loss of freshwater from the ice sheets at the poles attributed to the climate change and indicates the rise in sea level.

• Though the water loss in some regions like the melting ice sheets and alpine glaciers is clearly driven by warming climate, however, it may take more time and data to determine the driving forces behind other patterns of freshwater change.

California: Pumping groundwater for agricultural uses is considered as a significant contributor to freshwater depletion, however, one should not forget that groundwater levels are also sensitive to cycles of persistent drought or rainy conditions.

This was the cause of the significant groundwater depletion observed in California’s Central Valley from 2007 to 2015. Southwestern California lost 4 gigatons of freshwater per year during the same period. A gigaton of water would fill 400,000 Olympic swimming pools.

Saudi Arabia: Downward trends in freshwater were also seen in Saudi Arabia, reflecting agricultural pressures. From 2002 to 2016, the region lost 6.1 gigatons per year of stored groundwater

Africa’s western Zambezi basin and Okavango Delta: The team also identified large trends in terrestrial freshwater storage that do not appear to be directly related to human activities, but the outcome of the natural cycles of high or low rainfall.

A perfect example is Africa’s western Zambezi basin and Okavango Delta, where water storage increased at an average rate of 29 gigatons per year from 2002 to 2016. This wet period followed at least two decades of dryness.

This was caused by various factors such as additions to surface water from climate change-induced glacier melt, pumping of groundwater out of coal mines, depletions caused by increase in water consumption by irrigated cropland and evaporation of river water from the desert floor.

• The next generation of twin satellites called GRACE Follow-On (GRACE FO) is scheduled to be launched into the orbit from Vandenberg Air Force Base in California on May 22, 2018.

• GRACE-FO mission would be launched by NASA along with the German Research Centre for Geosciences.

• GRACE-FO will be launched to continue the original GRACE mission's legacy of tracking fluctuations in Earth's gravity field in order to detect changes in mass, including the mass of ice sheets and aquifers.

• Following this, NASA will be launching the Ice, Cloud, and land Elevation Satellite-2 (ICESat-2), which will use a highly advanced laser instrument to measure the changing elevation of ice around the world.