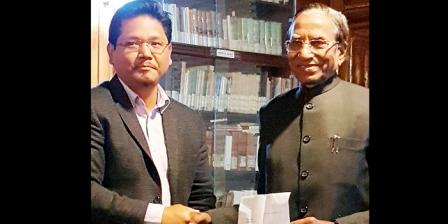 Conrad Sangma, the President of National People's Party (NPP), was on March 6, 2018 sworn-in as the 12th Chief Minister of Meghalaya. Sangma is the youngest son of former Lok Sabha Speaker late PA Sangma.

He was administered the oath of office and secrecy by Meghalaya Governor Ganga Prasad at a function in Shillong.

Despite Congress winning the largest number of seats in the state, Bharatiya Janata Party (BJP) and the National People's Party (NPP) are set to rule Meghalaya.

Earlier, NPP president Conrad Sangma was invited by the Governor Ganga Prasad to form the government after he submitted a letter of support from 34 legislators in the 60-member Meghalaya Assembly and staked claim to form the next state government.

Regional parties UDP, HSPDP and PDF extended support to the NPP on the condition that Conrad Sangma would be made the Chief Minister.

Meanwhile, Meghalaya Chief Minister Mukul Sangma offered his resignation to Governor after his party, Congress, failed to secure a majority.

The polling for the 59 seats of the 60-member Assembly in Meghalaya was held on February 27, 2018. Death of a candidate from Nationalist Congress Party in an IED blast resulted in countermanding of polls in one seat.

These Assembly Elections resulted in a hung assembly. Indian National Congress, which has been in power in state for over a decade, won the single largest tally of 21 seats out of the total 60. NDA ally, National People's Party, won 19 seats, BJP won 2 seats, United Democratic Party (UDP) won 6 seats.

• Conrad took over the reins of the NPP after the death of his father PA Sangma, former Lok Sabha speaker, in 2016.

• He is a Lok Sabha MP from the Tura parliamentary constituency in Meghalaya.

• He began his political career in the late 1990s, as the campaign manager of his father for the Nationalist Congress Party (NCP).

• He lost his first by-election in 2004 by 182 votes after contesting on an NCP ticket.

• He was first elected to the state Assembly along with his brother James Sangma in the 2008 state elections. Both contested on NCP tickets.

• In 2008, Conrad became the youngest Finance Minister of Meghalaya, under a UDP- led government.

• Later, he held the post of ‘leader of opposition’ in the Meghalaya legislative assembly from 2009 to 2013.

• He is the President of PA Sangma foundation that works for the betterment of education and the environment in rural Meghalaya.

• He studied at St Columba’s School in New Delhi and completed his BBA from Wharton at the University of Pennsylvania.