Balbir Singh Kullar was a part of the Indian team that won the Olympic Bronze in 1968 in Mexico.

Balbir Singh Kullar, former Indian hockey player and Olympic Bronze medalist passed away on February 28, 2020 after suffering a cardiac arrest at his residence in Punjab. He was 77.

He is survived by his wife Manjeet Kaur, son and two daughters. His cremation will be carried out today, March 2. 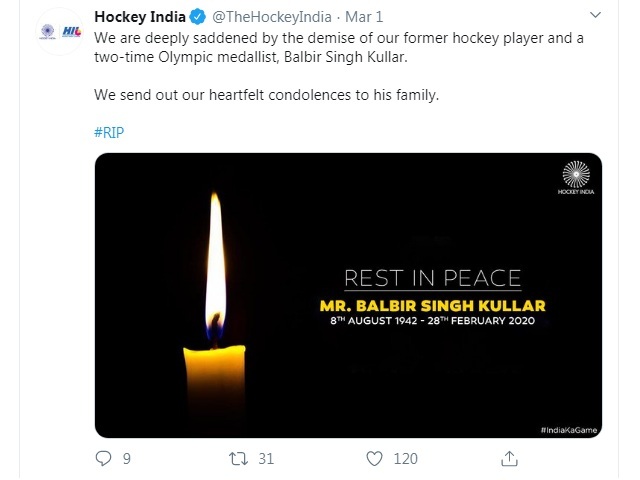 Who is Balbir Singh Kullar?

• He made his international debut in the Indian national Hockey team in 1963 in Lyon, France. He became renowned as an inside forward in the Indian team. He toured several nations including the Netherlands, West Germany, Belgium, England and New Zealand.

• He was a part of the Indian team that won the Olympic Bronze medal in 1968 in Mexico and the Asian Games gold in 1966 at Bangkok.

• He had later served as a national team selector for the Indian national hockey team.

• Balbir Singh Kullar’s stint with hockey began at school level itself when he captained the All India Schools during 1957–1960 and also played for the Combined University Team.

• He also represented the hockey teams of Punjab, Indian Railways and Punjab Police at the national level.

• He was appointed as the Deputy Superintendent of Police in 1981 and became an Indian Police Service officer in 1987.

• He retired from Police service as the Deputy Inspector General (DIG) in February 2001.

He was honoured with the Arjuna Award in 1999 to recognize his outstanding achievement in hockey.