Indian Prime Minister Narendra Modi is the third most followed leader on Twitter after US President Donald Trump and Pope Francis, as per a study by a global communications agency Burson Cohn & Wolfe. On the other hand, India’s external affairs minister Sushma Swaraj is the most followed female world leader.

Indian Prime Minister Narendra Modi is the third most followed leader on Twitter after US President Donald Trump and Pope Francis, as per a study by a global communications agency Burson Cohn & Wolfe (BCW).

• According to the study titled ‘Twiplomacy’, Indian Prime Minister Narendra Modi takes the third spot among the world’s most followed leaders with 42 million followers on his personal account.

• Sushma Swaraj, who is also the most followed foreign minister, has over 11 million followers. She occupies the seventh spot in the overall ranking.

• Among foreign ministries, India stands third on Twitter with more than 1 million followers. 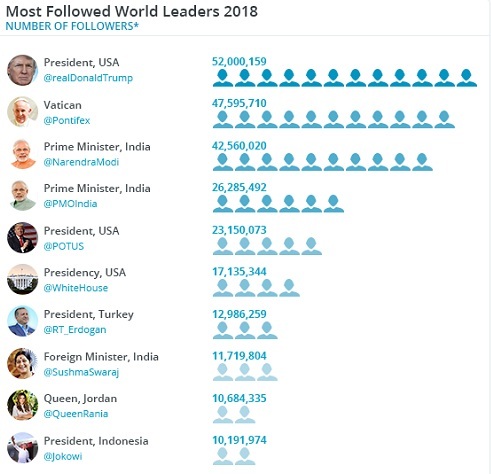 • In terms of influence on the microblogging site, with 52 million interactions over the past 12 months, Modi stands to be the second most influential leader in the world after US President Donald Trump.

• The study revealed that Trump is personally active on his own Twitter accounts and his tweets have generated 264 million interactions (likes and retweets) over the past 12 months, which is almost five times more than Modi.

• Considering the number of retweets as a measure of effectiveness, Saudi Arabia’s King Salman is the most effective world leader on Twitter.

• He has only tweeted 11 times between May 2017 and May 2018, but each of his tweets has received an average of 154,294 retweets. His posts are exclusively in Arabic and without any visuals.

• Trump is followed by Pope Francis at the third place with around 14, 277 retweets.

According to the study, the heads of state and government and foreign ministers of 187 countries had a presence on Twitter as of May 18, 2018, representing 97 percent of all 193 UN member states.

The study identified 951 Twitter accounts, 372 personal and 579 institutional accounts, of heads of state and government and foreign ministers of 187 countries. Around 131 foreign ministries and 107 foreign ministers maintain active accounts on the platform. Even the Chinese government's State Council Information Office maintains a presence on Twitter, Facebook and YouTube.

The six countries, which do not have an official presence on the platform, include Laos, Mauritania, Nicaragua, North Korea, Swaziland, and Turkmenistan.

The study further revealed that Facebook is the second-most popular network among government leaders and it is where they have the biggest audiences. Instagram, on the other hand, has become the third-most popular social network for governments and 81 percent of all UN member states have set up an account, many of which are sharing daily Instagram stories.