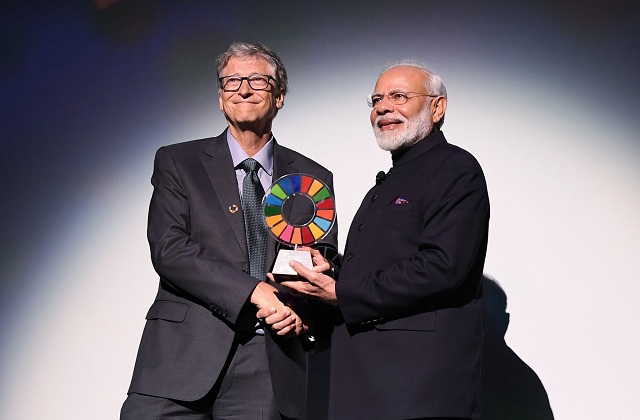 PM Modi dedicated the Global Goalkeeper Award to the 130 crore people of India and the collective endeavours of the nation to improve cleanliness. The Prime Minister said that it makes him the happiest knowing that India’s successes in sanitation have helped women and children the most.

PM Modi further stated that the Bill and Melinda Gates Foundation have honoured him with the award at a time when the world is commemorating the 150th birth anniversary of Mahatma Gandhi and when India’s is making remarkable progress in fulfilling the great leader’s dream of a Swachh Bharat. 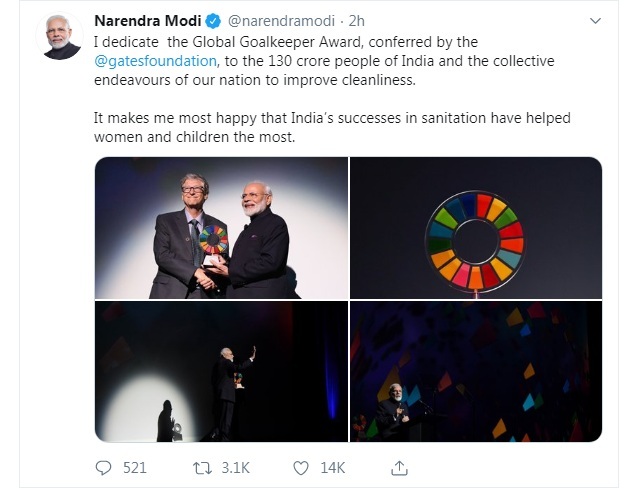 The Prime Minister credited the people of India for the success of the Swachh Bharat Mission. He said that the people made this movement their own by going to the extreme extent of selling their personal belongings and savings to build toilets and ensure that the desired results were attained.

Over, 11 crore toilets were built in the country under the mission, which is a record. However, the Prime Minister stated that the success of the Swachh Bharat Abhiyan is beyond numbers. He said that the poor, especially the women in the country, benefited the most from the mission.

He acknowledged how many women waited till night and young girls dropped out of schools mid-way due to lack of washrooms. The Prime Minister said this led to numerous health issues among the women and girls, which his government wanted to do away with. PM Modi further said that India is ready to share best practices with other nations so that we can collectively work to improve global sanitation coverage.

The Swachh Bharat Abhiyan, launched on October 2, 2014, is an ambitious mission of the Narendra Modi-led government to improve sanitation in India.

Under the mission, the central government kept the target of making India 'Open Defecation Free' by 2019.

The Goalkeepers, Global Goals Awards aim to highlight the extraordinary stories of remarkable individuals who are taking action to give life to the global goals and help achieve by 2030.  The fourth edition of the awards was presented on September 24, 2019.

The Global Goalkeeper Award aims to recognise a political leader for his/ her commitment to the global goals through impactful work in their country.