The Indian projects in Seychelles include the inauguration of a new Magistrates’ Court Building, one MW solar power plant, 10 High Impact Community Development Projects and handing over of a new Fast Patrol Vessel to Seychelles Coast Guard. Read more here. 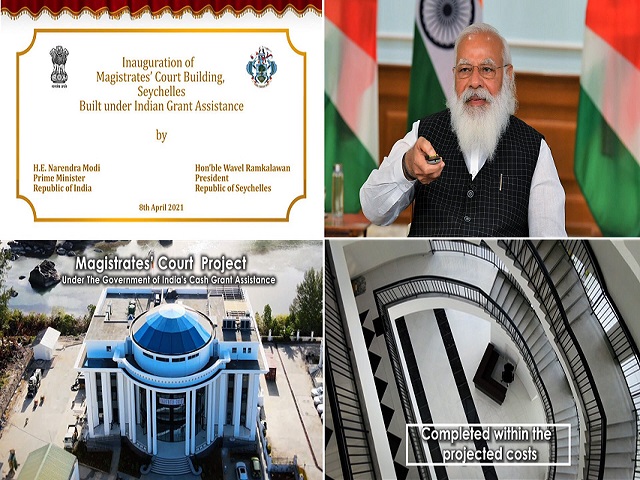 The projects include the inauguration of a new Magistrates’ Court Building, one MW solar power plant, 10 High Impact Community Development Projects (HICDPs) and handing over of a new Fast Patrol Vessel to Seychelles Coast Guard. These projects are a part of India's Indo-Pacific vision.

This was the first interaction between Prime Minister Narendra Modi and Seychelles President Wavel Ramkalawan after the latter came to power following a landmark victory in October 2020 elections.

Joint e-inauguration of the new Magistrates’ Court Building in Seychelles.

While speaking during the virtual event, PM Narendra Modi said that India and Seychelles share a vital partnership in the Indian Ocean neighbourhood and the country is central to India's vision of Security And Growth for All in the Region (SAGAR).

Assistance in Time of need

He said that India is honoured to have played the role of a strong partner of Seychelles in this fight against COVID-19. He highlighted how India was able to supply essential medicines and 50,000 doses of vaccine during the time of need and assured that India will stand firmly with Seychelles in its effort for post-COVID-19 economic recovery.

The Prime Minister also called the Seychelles President Wavel Ramkalawan "son of India" due to his Bihar roots and said that all Indians feel proud of his achievements. He said that his election as president shows people of Seychelles have a dedication to public service.

The Prime Minister highlighted that climate change especially poses a threat to island countries and therefore, India is handing over a one Mega Watt solar power plant in Seychelles that was built with India's assistance.

He further said that India will remain committed to strengthening the maritime security of the Seychelles and for the same, India is handing over a new, state of the art, Made-in-India Fast Patrol Vessel to the Seychelles Coast Guard.

He also spoke about the new state-of-the-art Magistrates' Court Building in Seychelles, which was built with India's assistance, saying that it was completed even during these testing times of Covid-19 pandemic.

The President of Seychelles, Wavel Ramkalawan appreciated the solidarity shown by India over the years, saying that the support they have received from India has contributed immensely to the socio-economic development of their country.

He reiterated how in less than two months, the two nations will be commemorating the 45th anniversary of the formal establishment of diplomatic relations between Seychelles and India.

The Seychelles President also praised India for its support on the COVID-19 vaccine front, saying that Seychelles is nearing its target of achieving 70 per cent of heard immunity by the end of this month due to the precious donation of vaccines by India.

•The new Magistrates’ Court Building is a landmark project that will be inaugurated in the capital city of Seychelles, Victoria.

•Situation next to the Supreme Court of Seychelles that was built by Chinese assistance in 2013, the new Magistrates’ Court Building will help bring magistrate courts spread over different locations in Mahe into a single building.

•The state-of-the-art building will substantially enhance the capacity of the Seychelles judicial system and aid in better delivery of judicial services.

•The Fast Patrol Vessel, named as 'PS Zoroaster', is the fourth ship to be gifted by India to Seychelles to strengthen its maritime surveillance capabilities.

•The 48.9-metre vessel is a modern and fully equipped naval ship, which has been built in India by Garden Reach Shipbuilders and Engineering Ltd. (GRSE) at a cost of Rs 100 crore.

•The naval ship will be used by the Seychelles Coast Guard for multi-purpose operations such as patrolling, search and rescue operations and anti-smuggling and anti-poaching operations.

•The Indian Navy delivered the vessel to Seychelles on March 16, 2021.  The other ships gifted to Seychelles by India include PS Topaz in 2005, PS Constant in 2014 and Patrol Boat Hermes in 2016.

•The one MW solar Plant will be handed over to the Seychelles government by Prime Minister Narendra Modi during the virtual event.

•The project is in addition to the installation of solar systems at 146 Seychelles government building rooftops and domestic,  households which has already been completed and commissioned.

•The 10 High Impact Community Development Projects aim to implement small people-oriented projects that contribute significantly towards the socio-economic development in Seychelles and the improvement of the local communities there.

•So far, twenty-nine projects have been taken up for execution under the Memorandum of Understanding signed between the two nations.

Seychelles has another special connection with India, as its current President Wavel Ramkalawan is of Indian origin. His ancestral roots trace back to a district called Gopalganj in the Indian state of Bihar.

He had visited India in January 2018 as a part of the PIO Parliamentarian's Conference and had also visited his native village 'Parsauni'.