Ravish Kumar has been honoured with the 2019 Ramon Magsaysay Award.

Eminent journalist Ravish Kumar wins Magsaysay Award for 2019 on August 2, 2019. Ramon Magsaysay Award is the highest honour given to Asian individuals and organisations. Ravish Kumar has been awarded for "harnessing journalism to give voice to the voiceless". This award is known as the Asian equivalent of the Nobel Prize.

Ravish Kumar is among the five recipients of Ramon Magsaysay Award. The award citation says that Ravish Kumar’s ‘Prime Time’ programme deals with real-life, under-reported problems of ordinary people. The award citation describes Ravish Kumar as a sober, well-informed and incisive anchor who has been highly vocal on insisting that the professional values of balanced, fact-based reporting be upheld in practice. 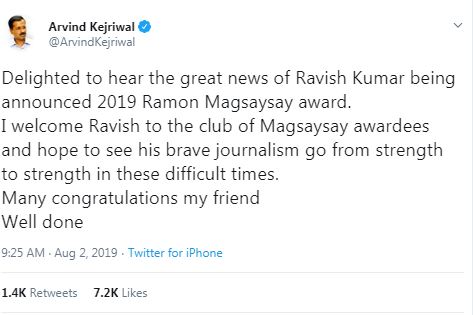 Other Indian winners of Ramon Magsaysay Award are - RK Laxman, P Sainath, Arun Shourie, Kiran Bedi and Arvind Kejriwal. Delhi Chief Minister Arvind Kejriwal tweeted that he is delighted to see Ravish Kumar in the club of Magsaysay awardees and hope to see his brave journalism go from strength to strength in these difficult times.