The crucial data for the new research were gathered on Cassini's final close flyby of Titan, on April 22, 2017. 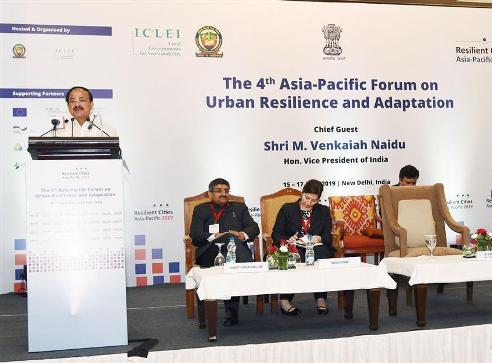 The 4th Resilient Cities Asia-Pacific (RCAP) 2019 Congress was organised by ICLEI – Local Governments for Sustainability and hosted by South Delhi Municipal Corporation from April 15 to 17, 2019 in New Delhi. It offered cities and regions from Asia-Pacific a variety of innovative solutions that build resilience to climate change at the sub-national level. The event also offered a combination of high-level planarians and technical sessions on the implementation and achievement of the Sustainable Development Goals, the Nationally Determined Contributions (NDCs), and the New Urban Agenda of 2016.

RCAP was launched in 2010. Resilient Cities is the annual global platform for urban resilience and climate change adaptation where dialogues are conducted to forge partnerships, with the ultimate goal of identifying implementable solutions and creating lasting impacts for cities in the region.

The new findings, published in Nature Astronomy, are the first confirmation of just how deep some of Titan's lakes are (more than 300 feet, or 100 meters) and of their composition. They provide new information about the way liquid methane rains on, evaporates from and seeps into Titan, the only planetary body in our solar system other than Earth known to have stable liquid on its surface.