The drone attacks on Saudi Arabia's major oil facilities have engineered the rise of Global Oil prices. The attack caused disruption on more than 5 percent of global supply. In the aftermath of the attack, the United States accused Iran as the main culprit. However, Iran strongly rejected the US accusation.

The drone strike knocked out 5.7 million barrels of daily crude production or 50 percent of the Saudi's oil output in an attack on Aramco’s processing plants at Khurais and Abqaiq oil field, one of the world's biggest petroleum-processing facility. It affects more than 5 percent of global daily oil production.

After this attack, that caused global oil-supply disruption, Brent crude jumped to $66.28 a barrel an increase of nearly 10 percent.

The impact of this attack is not only visible on Oil price surge, but on financial markets around the world including gold, the yen and Treasuries. Also, commodity-linked currencies like Norwegian krone and the Canadian dollar also surged. The US gasoline futures jumped almost 13%, while West Texas Intermediate rose to $59.75 in Asian trading, an increase of 8.9 percent.

However, prices came down slightly after US President Donald Trump ordered the release of US reserves.

In a series of tweets, US President Donald Trump said "Saudi Arabia oil supply was attacked. There is a reason to believe that we know the culprit, are locked and loaded depending on verification, but are waiting to hear from the Kingdom as to who they believe was the cause of this attack, and under what terms we would proceed!". He also authorized the release of oil from the Strategic Petroleum Reserve, if needed.

"Based on the attack on Saudi Arabia, which may have an impact on oil prices, I have authorized the release of oil from the Strategic Petroleum Reserve, if needed, in a to-be-determined amount sufficient to keep the markets well-supplied". 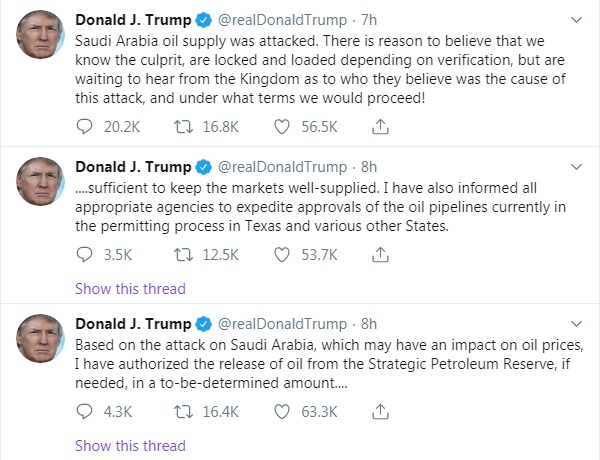 It is to be noted that this is the first time the President has directly hinted a potential military response to the attack and said "US is locked and loaded" to respond.

However, these remarks drew an angry response from Iran. Abbas Mousavi, the foreign ministry spokesperson said: "Such fruitless and blind accusations and remarks are incomprehensible and meaningless. The remarks were designed to damage Iran's reputation and provide a pretext for "future actions" against the Islamic republic".

The US and Iran have been at loggerheads ever since President Trump decided to pull out from 2015 Nuclear deal that ensured Iran ease from sanctions in return for curbs on its nuclear program.

The Energy Minister of Saudi Arabia Prince Abdulaziz bin Salman said Saudi Arabia will use its existing huge oil reserves to counter disruption to production. These oil reserves have been built during 1988 and 2009 to be used in a crisis. Saudi Arabia had built five such giant underground storage facilities across the country.

India is World's third-largest importer of oil and Saudi Arabia is the second-largest supplier of crude oil and cooking gas to India. In such scenarios, it has a reason to worry as geopolitical tensions in West Asia could further diminish the prospect of India's economy.

For India, Rising oil is negative for the economy and it may affect stocks and rupee.  Because a dollar increase in the price of oil will raise the import bill by around Rs10,700 crore annually. To control it, major steps needed to bring the Indian economy on track.