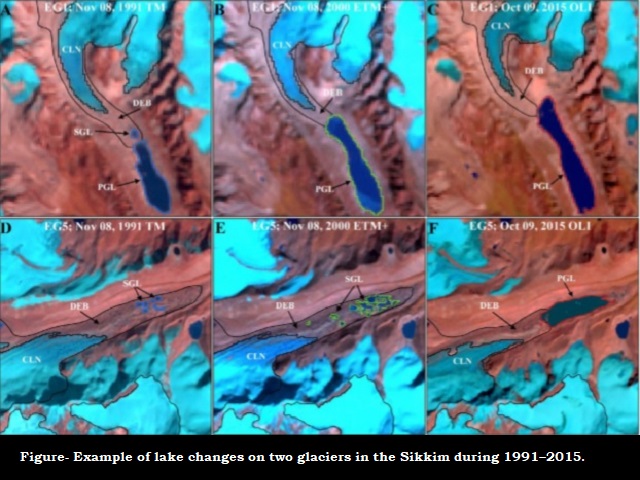 Sikkim’s glaciers are losing mass faster than other parts of the Himalayas, as per a study of Geology of the Himalaya. The study was conducted by scientists from the Wadia Institute of Himalayan Geology, an autonomous research institute in Dehradun.

The study discovered that the glaciers in Sikkim are melting at a higher magnitude than other Himalayan regions. The study was published in the international scientific journal, Science of the Total Environment.

The study assessed the response of 23 glaciers of Sikkim to climate change between 1991 and 2015 and revealed that the glaciers have retreated and deglaciated significantly during the period.

• While the small-sized glaciers in Sikkim have been reducing, the larger ones are thinning due to climate change.

• The magnitude of dimensional changes and debris growth has been reported to be higher in the Sikkim, in comparison to other Himalayan regions.

• The study observed a major shift in the behaviour of glaciers around 2000. While the glaciers in western and central Himalayas were reported to have slowed down in recent decades, the glaciers in Sikkim showed negligible deceleration after 2000.

• The rise in summer temperature has been thought to be the main reason behind the changes in glaciers.

• Sikkim’s glaciers have generally not been studied in detail, hence to understand them better, the scientists conducted a detailed literature survey to assess the existing knowledge about the various parameters of Sikkims’s glaciers including their length, area, snow-line altitude, debris cover and how they respond to global warming.

• Then the scientists selected 23 representative glaciers from the region based on various factors including length, size, debris cover, slope and other details.

• They then procured the multi-temporal and multi-sensor satellite data covering the selected glaciers.

• The team analysed the results and compared it to the existing studies and the impact of various factors was systematically explored.

The behaviour of the glaciers in Sikkim has largely been heterogeneous and mostly determined by their size, debris cover and glacial lakes. Though melting is observed in both small and large-sized glaciers, they seem to adopt different methods to cope with climate change. The smaller glaciers are known to mostly deglaciate to adjust to the change, the large glaciers lose mass through thinning.

There has not been much study on the glaciers in Sikkim and most field-based measurements of mass balance have been conducted on only one glacier- ChangmeKhangpu and that too between 1980-1987. Hence, the latest study for the first time studied different parameters of Sikkim’s glaciers and explored their behaviour.