Gujarat was ranked as the "Best Performer" in the States’ Start-up Ranking 2018. Gujarat allocated Rs 100 Crore budget for Startups and provided assistance to 200 projects.

The Department of Industrial Policy and Promotion (DIPP) on December 20, 2018 announced the results of the first ever States’ Start-up Ranking 2018. DIPP began the exercise to review the Start-up ecosystem of the states from January 2016.

Gujarat was ranked as the "Best Performer" in the States’ Start-up Ranking 2018. Gujarat allocated Rs 100 Crore budget for Startups and provided assistance to 200 projects. 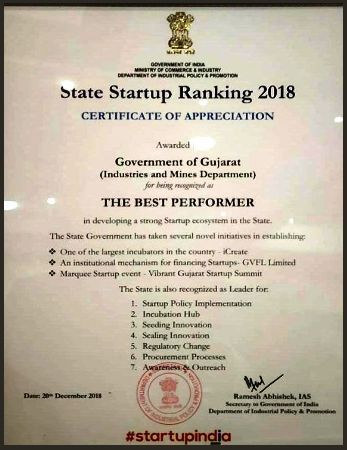 Categories under which states were scrutinized

On the basis of performance in these categories, the States were recognised as the Best Performer, Top Performers, Leaders, Aspiring Leaders, Emerging States and Beginners.

• The key objective of the exercise was to encourage States and Union Territories to take proactive steps towards strengthening the Start-up ecosystems in their states.

• The entire exercise was conducted for capacity development and to further the spirit of cooperative federalism.

• The methodology behind the exercise was aimed at creating a healthy competition environment wherein States were encouraged further to learn, share and adopt good practices.

• Awareness workshops in all States

• Pairing of States for intensive mentoring

• International exposure visits to US and Israel

• Intensive engagement between the States with Start-up India team

Initiatives embarked by DIPP to list the states fairly

• DIPP consulted all stakeholders of the Start-up ecosystem and came up with 7 key reform areas as the basis of the States’ Start-up ranking framework.

• An online portal was launched by DIPP to enable States in seamlessly submitting their initiatives across these reform areas.

• An Evaluation Committee, comprising independent experts from the Start-up ecosystem, assessed the responses across various parameters.

• Many parameters involved getting feedback from beneficiaries.

• More than 40000 calls were made in 9 different languages to connect with beneficiaries to get real figures at the implementation levels.