The Supreme Court stated that it is a law and order problem and questioned the act of burning the public buses. 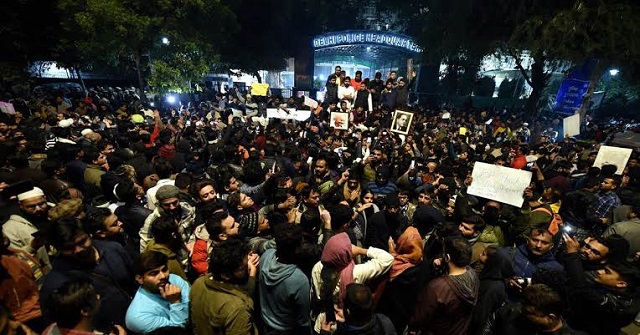 The Supreme Court of India on December 17, 2019 refused to take up pleas against police atrocities on Jamia and Aligarh Muslim University students and asked the petitioners to approach the jurisdictional High Court.

The apex court, during the case hearing, stated that it does not have to intervene, as it is a law and order problem. The court questioned the act of burning the public buses and asked the petitioners to approach jurisdictional High Court. 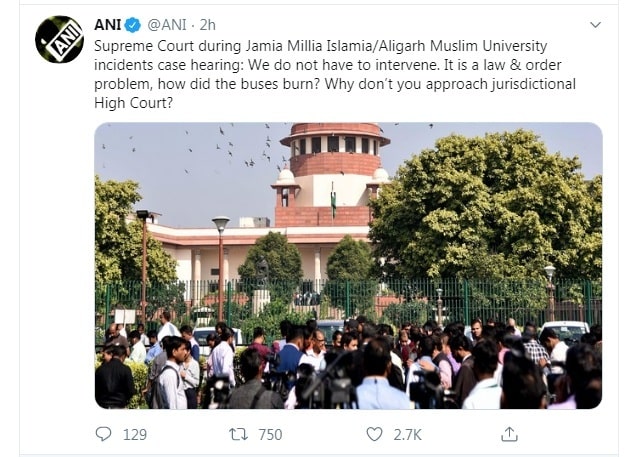 Indira Jaising, appearing on behalf of the students, argued that as per the established law, the police cannot enter the universities without the permission of the Vice Chancellor. The lawyer questioned the police crackdown, saying that many students were hurt as a result of it. Solicitor General, Tushar Mehta refuted the claim.

Jaising further reiterated the need to set up a fact finding SIT, arguing that it is a cross state issue. She asked the court to give a similar order as it had done in the Telangana encounter case.

The Supreme Court in its response stated that the Telangana encounter case could be looked into by appointing a commission but in this matter, there is no committee that can look into it across the country. The apex court bench stated that given the nature of the case and its vast disputed area, it would be feasible to appoint a single committee to look into the issue in different states. However, it will require collection of evidence from various states.

The court further, urged the petitioners to approach the jurisdictional High Court where protests had taken place. The court stated that the concerned HCs will be at liberty to appoint former SC/HC judges to inquire into the issue after hearing the version of the centre and the respective states.

The Supreme Court had agreed to take up pleas alleging police atrocities on students protesting against the citizenship amendment bill 2019 on December 17, 2019. The students belonged to Jamia Millia Islamia University in Delhi and Aligarh Muslim University.

The matter was mentioned before the apex court by a group of lawyers, who urged the court to hear it on an urgent basis. The bench informed the lawyers that it will take up their petitions on December 17.

The SC bench looking into the matter was headed by Chief Justice S A Bobde and comprised Justices B R Gavai and Surya Kant. Before taking up the pleas, the apex bench took serious note of the rioting that took place in the national capital on December 15 and the destruction caused to the public property including burning of buses during protests and said that such acts must stop immediately. 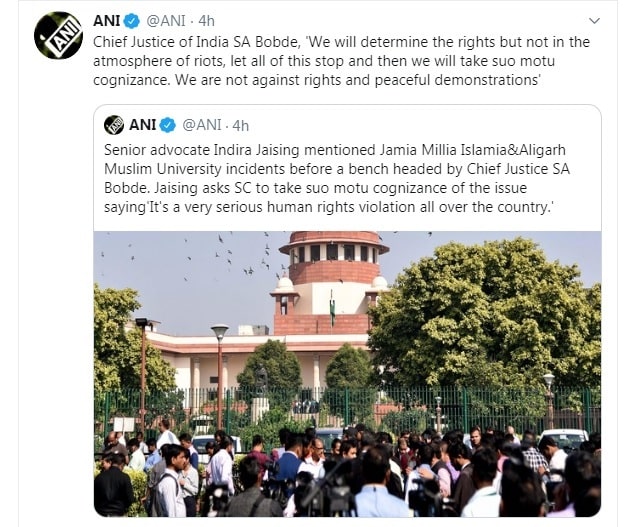 Prime Minister Narendra Modi expressed his distress over the violent protests that have gripped several parts of the country including the national capital in a series of tweets.

PM Modi tweeted saying that the violent protests are unfortunate and deeply distressing. He noted that debate, discussion and dissent are essential parts of democracy but damage to public property has never been a part of our ethos.

The Prime Minister stated that the Citizenship Amendment Act, 2019, which was passed by the Parliament with overwhelming support, illustrates India’s centuries-old culture of acceptance, harmony, compassion and brotherhood. He assured that the act does not any citizen of India of any religion.

Further, PM Modi reiterated the need to maintain peace, unity and brotherhood. He appealed to everyone to stay away from any sort of false reports and rumors.

Delhi became a war zone in the afternoon of December 15, 2019 when a protest march led by students of Jamia Millia Islamia University took a violent turn with a group of people clashing with the police and setting fire to buses. Several students and policemen were injured in the clash. 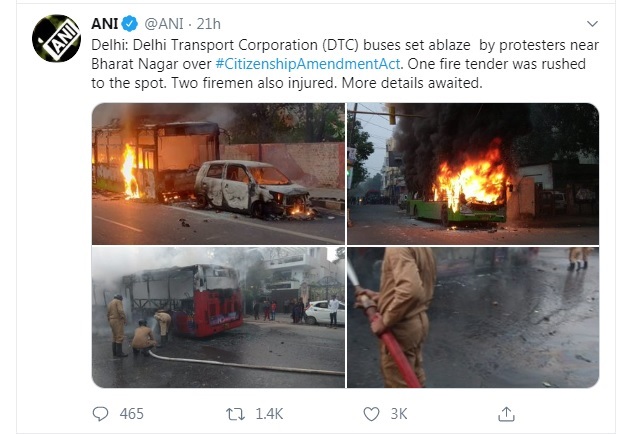 In retaliation, the Delhi Police detained over 100 students after forcible entering the Jamia campus. An unofficial emergency was declared inside the campus and regular services were hit around the area. Several metro stations were closed following the unrest and road traffic was also diverted. Delhi’s Deputy CM Manish Sisodia declared that schools in south-east Delhi will be shut on December 16.

The students of the Jamia university maintained that the violence was not triggered by them but by outside elements. The protests against the police crackdown in Jamia hit other universities as well, including Aligarh Muslim University, Hyderabad’s Maulana Azad Urdu University, Kolkata's Jadavpur University and the Banaras Hindu University. 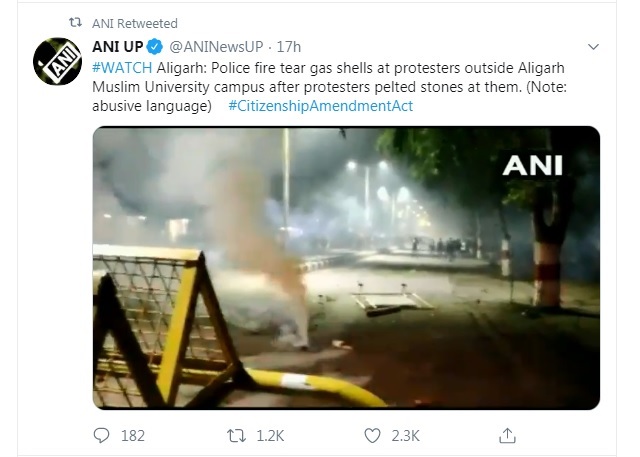 In Delhi, thousands gathered outside the Delhi Police Headquarters on Sunday evening, protesting against police’s alleged forced entry into the Jamia campus and detaining of Jamia students and demanding their immediate release. 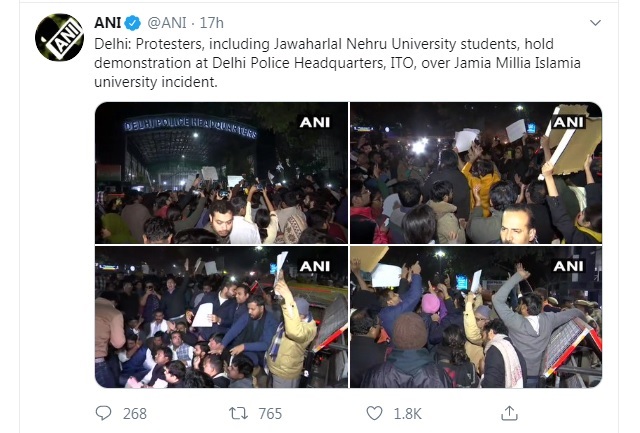 The crowd began dispersing only around 3.30 am on December 16, when the Delhi Police announced that all the detained students have been released.

Violence has held several parts of India captive including West Bengal and the north-east, ever since the citizenship amendment law was introduced in the parliament and was passed with majority support.