Sushma Swaraj was taken to AIIMS around 9:30 pm last night in a critical condition but doctors could not save her. Sushma Swaraj, former external affairs minister, passed away on August 6, 2019. She was 67. Sushma Swaraj was taken to the AIIMS soon after she suffered from a heart attack.

President Ram Nath Kovind said he was shocked to hear the news while Prime Minister Narendra Modi said this is the end of a glorious chapter in Indian politics. As per the information available, the last rites will be performed at 3 pm in New Delhi.

She has saved and helped many Indians during her tenure as external affairs minister. Sushma Swaraj was suffering with kidney disorder from a long time, she had a kidney transplant in 2016 and had opted out of contesting Lok Sabha polls earlier this year due to health reasons. She is survived by her husband Swaraj Kaushal and daughter.

“Narendra Modi Ji – Thank you Prime Minister. Thank you very much. I was waiting to see this day in my lifetime,” she had said.

From political personalities to Bollywood celebrities took to Twitter to condole her sudden demise. Prime Minister Narendra Modi said in a series of tweets that she will be remembered forever for everything that she’s done for India. 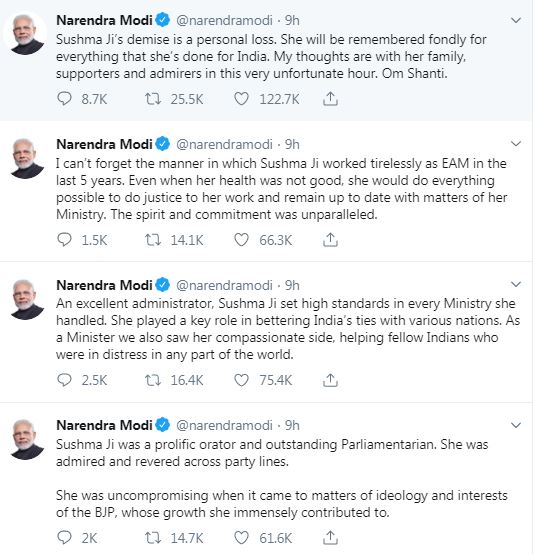 • Sushma Swaraj was born on February 14, 1952, at Ambala Cantonment, Haryana. Her father Hardev Sharma was an eminent member of Rashtriya Swayamsevak Sangh.
• She was a prolific politician of India served as the External Affairs Minister (EAM) in the sixteenth, Lok Sabha led by Narendra Modi.
• At the age of 25, she became the youngest cabinet minister in India. However, she also holds a record of becoming the first woman chief minister.
• Apart from that, Sushma Swaraj was the Cabinet Minister in the Department of Labour and Employment Haryana from 1977 to 1979, and Cabinet Minister in Department of Education, Food and Civil Supplies at Haryana from 1987 to 1990.
• Sushma Swaraj served as the Minister of External Affairs of India in the first term of Narendra Modi government from 2014 to 2019.